Sun Ra and His Arkestra: Sun Ra: Jazz in Silhouette

By ROBERT MITCHELL
September 30, 2013
Sign in to view read count 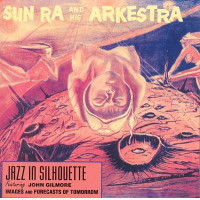 As with many cult artists, the back catalogue of Sun Ra is long and varied with large, less than bitesize chunks available for consumption if you so desire. Many of Sun Ra's LPs have been re-issued on vinyl, and to anyone curious about Sun Ra (and let's face it—who isn't curious about a man who claimed he came from Saturn) knowing where to start listening is a problem. It was certainly one I had. So, as is often the way, I turned to my well thumbed Penguin Guide to Jazz on CD. This often infuriating volume I consider to be like a slightly different Marmite—you can both love and hate it at the same time—and yet time and time again, jazz lovers will use it for a quick fact or opinion. I'm no different, and so when Misters Cook and Morton recommended Jazz in Silhouette as "one of the most important jazz records since the war," my hands were tied and my conscience left me no choice but to buy it.

And you know what? They're not far wrong. Ra and his Arkestra recorded the album in 1958 and it was released a year later on his own label— El Saturn. The subtitle of the record is "Images and Forecasts of Tomorrow." The variety and mix of styles on the album certainly lent themselves to being thought of as commentary on the way jazz was heading (Ra's liner notes say that these are the images and forecasts of tomorrow disguised as jazz) My re-issue LP starts with "Images," Ra's shimmering cocktail piano soon making way for a swinging, minor key tune which the whole Arkestra fully gets behind. Straight away, this is one of the joys of the record—the rich, deep, fulsome sound that Ra gets from his performers.

Earlier this year Jazzman put out the fourth volume in their superb "Spiritual Jazz" compilations. On this triple vinyl release was a vocal version of Sun Ra's "Enlightenment," a sparse, haunting take on the tune. On Jazz in Silhouette, we have a far earlier version. Written by trumpeter Hobart Dotson, here it lopes along rather bluesily, before counter melodies and the walking bass pick things up. Even moments of Latin 'cha cha cha's are thrown in the mix and with the melodies and arrangements so strong, it is this version I prefer.

It's not all about that though—Sun Ra hasn't forgotten the value of a good old blowing session, and "Blues in Midnight" with Ronnie Boykins bass sounding like he's been let off his leash, this 12 minute track sees the soloists all make their statement. Ra's own tinkling piano (might it be a celeste here?) is possibly the highlight—very other worldly. The flip side is equally fantastic, from the heavily syncopated "Velvet" (allmusic.com's claim that it sounds like a confused version of "Jeepers Creepers" is both astute and amusing) and 'Saturn' which is along the same lines. The remarkable 'Ancient Ethiopia' with its ominous tom toms and fluttering flutes sounds very much from this world—but a touch oriental and of course African. At times it is not too far removed from something by Yusef Lateef. It's an odd end to the album which is one of many tangents, and with so much to hear on it, can be recommended as a thoroughly satisfying listen.

An interesting though confusing story exists about Sun Ra (whose birthday it is today, May 22nd) and his deal with Impulse Records. Having released much of his old work (including Jazz in Silhouette) on his own label, with hand designed covers and much love and attention, Ra had not had much 'big' label exposure. When, in 1972, Ed Michel from Impulse Records (at this point part of ABC) put forward a deal to sign Ra and some new albums, Ra and his business partner Alton Abraham swiftly refused, turning the contract around so Ra had control of the copyright. Of course, Michel did not take this well, and instead negotiated a licensing agreement for part of the back catalogue. He claims to be surprised by Ra and Abraham's willingness to go along with this but as Gary Giddins in his book 'Weather Bird' points out, two of the albums Michel ended up putting out weren't even recorded until 1973; Ra seems to have got one over on the bigger label—selling new material as old, and retaining the copyright!