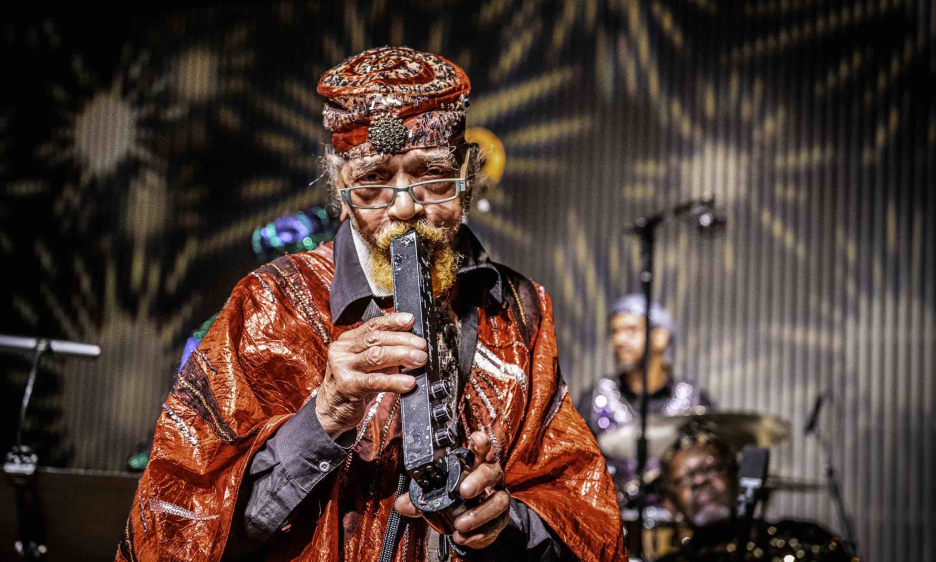 Jazz has a storied history of hosting any number of iconoclasts. But few can compete with the late Sun Ra for sheer brazen originality and prodigious recorded output. The man born as Herman Blount (1914-1993) was an Arkansas-born pianist, synthesizer player, composer and bandleader. Blount also maintained that he was from Saturn and had a following of acolyte musicians whom he would cook for and rehearse daily with in a house in Philadelphia. The home, which still houses a commune to this day, was inherited from his parents by the now 95-year-old saxophonist Marshall Allen, who continues to lead the band.

Back in 1972 filmmaker Jim Marshall met Sun Ra in California and made a film with him called Space is the Place. The plot is wacky, somewhat nebulous and hard to follow. It is decidedly a period piece, especially given its stereotypical casting of women in a bordello. Ra opens opens an "Outer Space Employment Agency" and interviews various applicants. After being kidnapped by a team of white NASA scientists, Ra takes off for outer space again, and the Earth explodes.

For the first two nights of a stellar four-night run at SFJAZZ, the Arkestra accompanied Space is the Place and the last two nights it was just the band. As the film began, vocalist Tara Middleton intoned while, on the screen, a spacecraft circled over Oakland and landed, reuniting Sun Ra with planet Earth. The music flowed along with the film. Allen cut loose on his tenor just as Sun Ra managed to loosen his ropes to escape from the kidnap attempt.

After the film ended with Sun Ra's ascent, the band's sonic constraints were lifted, as they no longer had to stick with the soundtrack, and improvisation came to the fore for renditions of the classics "Space is the Place" and "Free at Last;" the band joyously paraded through the audience, Scott turned somersaults on the state and the evening came to a boisterous end.

Sunday night, the concluding evening, opened as Wisteria danced with a red cape while vocalist Middleton set the tone. Three rows of musicians faced the audience. Allen fronted the band with tenor saxophonists Danny Ray Thompson and James Stewart to his right and baritone saxophonist Knoel Scott next to them. Behind them, French horn player Vincent Chancey contributed mightily to the eclectic sound mix as did the bold and brash playing of trombonist Emmett Mcdonald and Bay Area cello player Kash Killion contributed an outstanding solo. Allen turned his back to the audience to conduct at times. and he alternated lovely flute with brash tenor, as well as expressive playing with his out-of-this-world (Electric Valve Instrument). Together they performed such tunes as "Somebody Else's Idea": "Somebody else's idea of somebody else's world
Is not my idea of things as they are
Somebody else's idea of things to come
Need not be the only way
To vision the future" Allen's "Angels and Demons" was supplemented by some other classic chestnuts as "Fate in a Pleasant Mood," "Dancing Shadows," "Seductive Fantasy," "Two Tones" and the soaring "Discipline 27-11" suite.

The two-hour show concluded with Allen leading the audience in a nonsense chant. The lights came up and Allen talked about their extensive European tour as the evening came to an end.