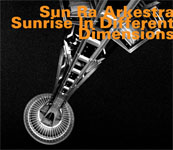 Sun Ra's discography is so vast, and its entry points so varied, that the late pianist and bandleader means a lot of different things to a lot of different people. For most, Ra is probably best known for orchestral performances of his space-related, inside/outside, original compositions. And if that's your bag, you'll find plenty to love on this reissued live recording, which features 71:04 minutes of selections from a two-set gig in Willisau, Switzerland in 1980.

But check the track listing. Five of the pieces clearly have their origins on Ra's native planet, Saturn; but the majority stem from other places and other times. Thelonious Monk's "Round Midnight," Coleman Hawkins' "Queer Notions," Jelly Roll Morton's "King Porter Stomp," Duke Ellington's "Lightnin'" and Billy Strayhorn's "Take The A Train" are among ten jazz standards covered on the disc, if "covered" is the right word to describe these raucous (yes, even "'Round Midnight"), rocking, high-energy, radical but respectful interpretations—which, of course, it isn't.

It's often forgotten that Ra's earthly roots were in the swing era. One of his first professional gigs of importance was working as pianist, arranger and music copyist for bandleader Fletcher Henderson in 1946-47. And when Ra began to lead his own band, his space probes were still deeply rooted in swing, jump and bop styles—where they ever, ultimately, remained. The early masterpiece Jazz In Silhouette (Evidence, 1958), an elegant, swinging, exquisitely lyrical collection of Ra originals, sounds like it could have been recorded by a conventionally oriented ten-piece anytime during the late 1930s or 1940s; this, despite the presence of alto saxophonist Marshall Allen, tenor saxophonist John Gilmore and baritone saxophonist Pat Patrick, who all subsequently went on to fuel Ra's intergalactic travels.

Only later, with albums such as The Heliocentric Worlds Of Sun Ra (ESP, 1965) and Space Is The Place (Evidence, 1972), did Ra's media-boosted reputation for otherness take hold in the popular imagination. And by the mid 1970s, Ra's wheel was spinning in two directions: from this time on, until his death in 1993, he increasingly included "covers" in his set list, partly as a tribute to the great jazz composers who came before him, and partly because people loved to hear them. For just as Thelonious Monk's pianistic reinventions of standards such as "Smoke Gets In Your Eyes" and "These Foolish Things" helped "legitimize" him, so could Ra's growing audience on the international tour circuit more easily embrace the Arkestra's free forays from such (more or less) familiar points of reference.

The Willisau gig was the first date on a European tour, which explains the unusual lineup of one trumpet, no trombones and no bass: Ra had been expecting other band members to join him. (The story told about Ra instructing a successful auditionee for the Arkestra to turn up at the gig "on Thursday" comes to mind. When asked where the gig was, Ra refused to say. "Use your intuition," he urged. And though it is to digress, let's remember another great Ra soundbite: he once asked the writer Francis Davis if he'd seen the 1978 movie Star Wars, adding "It was very accurate.")

Ra plays an acoustic piano throughout; on these 15 tunes, at least, there isn't an electric "space keyboard" to be heard. He solos frequently—in exuberant, stride-to-free style—as do Marshall Allen, John Gilmore and baritone saxophonist Danny Thompson. Trumpeter Michael Ray is prominently featured too, both as a soloist and as a high-voltage, high-register and pretty convincing stand-in for a brass section. Of the five Ra originals, "Light From A Hidden Sun" is for solo piano and "Disguised Gods In Skullduggery Rendez-Vous" is a feature for piano and Allen's oboe.

It's great so hear so much acoustic Ra, the Arkestra is on fire and every minute of Sunrise In Different Dimensions is a blast. Wonderful and heartlifting.