Sun of Goldfinger at Nublu 151 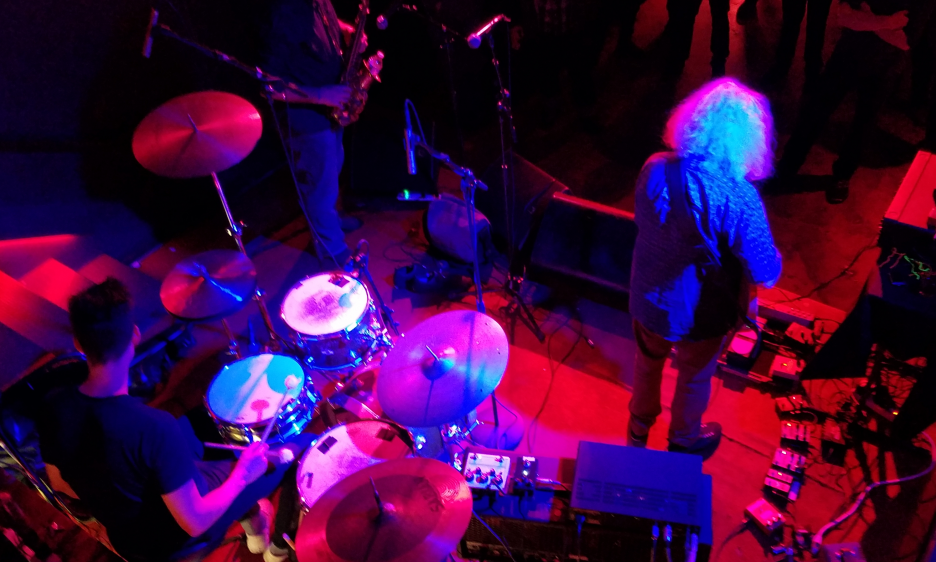 Nublu 151 is one of those venues only New York City, or more specifically, the Lower East Side, can get away with. From the outside, it looks like a construction barrier: black plywood with a door cut into it. Maybe there's fifteen seats and the rest are benches and floorspace. Take your pick. Flashy lights, booze, and a sound system to die for.

Into this vertically chic but cramped architecture comes Sun of Goldfinger or Son of Goldfinger as listed on the calendar board. At roughly eight twenty, long time locals and fellow adventurists, guitarist David Torn, alto saxophonist Tim Berne and time-defiant drummer Ches Smith began their sonic occurrence, immediately creating on Avenue C a seething, amorphous chaos; an hour-long improvised overture only the brave and inquisitive stand within.

The trio took this claustrophobia and the all the phobias in the room and blew them up. Makes them bigger. Smaller. Lesser. Greater. Grating one moment, soothing the next. Imploring all the while not fearing going over the cliff. That's where the freedom is. Torn's guitar was the rush of the wind against the fall. Churning, collapsing. A warm, modal place. Irregular harmonies, shifting currents. Berne's elongated, often furious, always voice-like declamations tinctured with fear and exhilaration. Abrasive soliloquies. Cries for companions.

Smith shed his jacket as if he was too close to the heat of willful conflagration and rolls out clouds of thunder, of whisper, of looping and cadence. Torn got dreamy, driven, manipulating a shamanic drone. Smith added shimmer. Berne laid out. The crowd lost in the swelling ambiance. It's resistance. It's cathartic. It's acceptance that nothing was what it seemed but could be. Berne began to whisper as if he had just returned from another investigation of silence. Time turned on the collective remnant of what music could be and is: a daring escape from the ether outside.