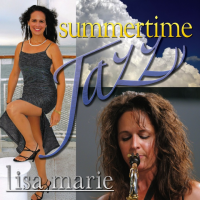 Born in Ancon, Panama, Lisa Marie Baratta came from a naval family, growing up in many places but finding music to be that certain constant, no matter where she traveled to next. Attracted to the woodwinds at an early age, Baratta also gravitated to alto and soprano saxophones, but became equally comfortable on flute. She plays all of these instruments on Summertime Jazz, her second album and follow-up to her 2003 self-produced debut, Struttin' (Lisa Marie Baratta, 2003). Though not a household name in the jazz world, her 23 years of professional playing has made her a first-call musician and fixture in the San Francisco Bay Area.

For this date, the saxophonist borrows nine familiar standards from the jazz canon, putting her spin on each piece in an essentially mainstream, straight-ahead recording. Adding something special to the disc, Baratta also includes two bonus tracks ("Let's Dance" and "Harlem Nocturne"), recorded live and featuring her solo performances with the California Pops Orchestra. With educator Don Turney introducing the opener on piano, Baratta's gorgeous alto saxophone voice tenderizes the classic "Unforgettable" before moving on to a sensuous rendition of "Besame Mucho." Baratta moves effortlessly between flute and saxophone on this internationally recognized song from Consuelo Velazquez.

One of the album's highlights is its swinging version of the familiar "Fly Me To The Moon," where Baratta once again performs on two instruments, ably assisted by San Francisco native John Hettel on bass and Bay Area drummer Andrew Eberhard. George Gershwin's "Summertime" stays true to the melody and down tempo nature, with no real surprises. The music stays cool, relaxed and light as Baratta and her quartet peel off delightful reads of Victor Young's "When I Fall In Love," Kosma's "Autumn Leaves" and Horace Silver's "Song For My Father."

The "not to be missed" moments of the album include the band's performance on Luiz Bonfa's exciting "Black Orpheus," as well as its treatment of Ralph MacDonald's classic pop chart, "Just The Two Of Us." Don't be fooled by the title; Summertime Jazz captures a contemporary jazz sound that fits any time of the season. A talented multi-instrumentalist with much to offer, the gifted Baratta has more than scratched the surface with this endeavor and seems poised to welcome the national recognition she certainly deserves.

Unforgettable; Besame Mucho; Fly Me To The Moon; Summertime; Song For My Father; When I Fall In Love; Autumn Leaves; Black Orpheus; Just The Two Of Us; Let's Dance; Harlem Nocturne.