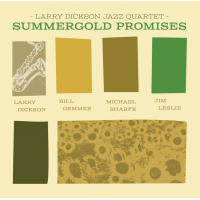 Cincinnati-based baritone saxophonist Larry Dickson's new album, Summergold Promises, is almost a companion piece to his previous enterprise, Second Springtime, which was appraised favorably here less than a year ago. The word "almost" is necessary because Dickson's front-line partner on Springtime, tenor saxophonist Brent Gallaher, has been replaced by trombonist Bill Gemmer, lending the quartet a moderately dissimilar but no less pleasing sound. The rhythm section remains intact, with bassist Michael Sharfe and drummer Jim Leslie tending to business without benefit of a piano.

As noted in the review of Springtime, Dickson's austere, full-bodied baritone is more Pepper Adams / Nick Brignola than Gerry Mulligan / Lars Gullin, while Gemmer travels the urbane path first tread by Carl Fontana, Kai Winding, Phil Wilson and their contemporaries. He and Dickson blend well together, as no doubt they did when working with Cincinnati's legendary Blue Wisp Big Band (Dickson, Gemmer and Sharfe were founding members, Gemmer now an alumnus). Technically speaking, there are no problems whatsoever, as each member of the group is a seasoned pro who has done his homework and come well-prepared to lend due diligence to every song on the menu.

Those songs include five originals by Dickson, the standards "My Romance" and "How Deep Is the Ocean," Billy Strayhorn's "Day Dream," Gary McFarland's "Weep" and Johnny Coles' "Funk Dumplin.'" Dickson is featured on "Day Dream," Gemmer on "How Deep Is the Ocean." The session opens with Dickson's charming "Sherrick Shuffle," written as a tribute to the late alto saxophonist Jim Sherrick who played with the Blue Wisp ensemble for thirty years. "My Romance," taken at a brisker tempo than usual, precedes the even-tempered "Day Dream" and Dickson's lone foray into unfettered territory, "Recalculating," parts of which are free from any constant rhythms or pre-planned chord changes. Needless to say, everything lands neatly in place with a minimum of discord.

Leslie's tom toms set a shadowy tone for Dickson's minor-key rhumba "No One to Miss," which is followed by the bright, fast-moving "Weep" and another Dickson theme, "Manchester Summer" (introduced by Sharfe's arco bass), a fond look back to the season when Dickson met his wife-to-be, Melissa. "Funk Dumplin'" is as advertised, an earthy contrivance with a heavy backbeat and typically well-turned solos and trade-offs by Dickson and Gemmer. "Ocean" leads to the lively closer, Dickson's "First Samba in Greensburg," a nod to Dickson's Indiana hometown in which the samba is about as popular as crows in a cornfield. Emphatic rhythms and a vigorous workout for drummer Leslie.

Trombone or tenor, piano or none, Dickson, as was the opinion on last year's Second Springtime, leads a splendid quartet, one whose sound and style are bright and engaging. Those who appreciate tasteful jazz in a modern wrapper should find much to like here.

Sherrick Shuffle; My Romance; Day Dream; Recalculating; No One to Miss; Weep; Manchester Summer; Funk Dumplin’; How Deep Is the Ocean; First Samba in Greensburg.