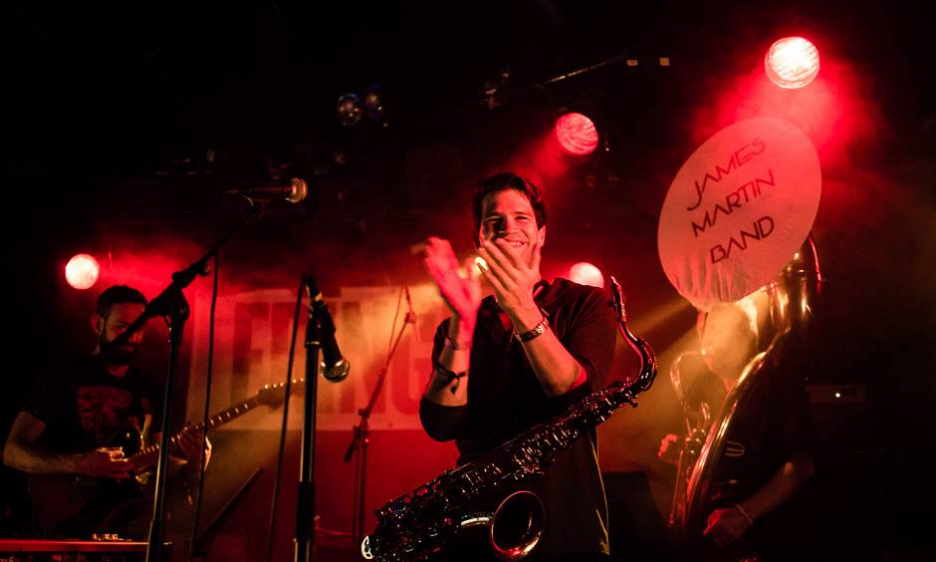 This year, Copenhagen Jazz Festival celebrates its 40th anniversary. It's a lot of years with a lot of music and the tendency has been unequivocal. The festival has been growing with new venues and artists added to a seemingly endless list. Part of this process has been the emergence of sub-festivals. Festivals within the festival. An example is saxophonist Benjamin Koppel's Summer Jazz, which takes place in the Betty Nansen Theatre in Frederiksberg and in Prøvehallen in Valby from July 6- 14. Another saxophonist, Johan Bylling Lang, is the man behind Fringe Jazz Fest in central Copenhagen that covers the same time span. It takes place in Pumpehuset and the garden outside the venue.

Both festivals have existed for some time now, but especially Bylling Lang's Fringe Jazz Fest has raised its profile in recent years with the move from the charming venue Charlie Scott's to the bigger capacity provided by Pumpehuset. Koppel has also branched out. Summer Jazz started as a local festival in the suburb of Valby and now encompasses both Valby and Frederiksberg, Copenhagen.

Sampling the program of these two festivals for a few days provided an irresistible opportunity to connect dots in jazz history. In fact, hearing the music on these festivals was a chance to move from the cradle of jazz to the golden age of jazz in Denmark right up to a redefinition of what jazz can be today. The common denominator was respect for tradition.

Fringe Jazz Fest is a celebration of New Orleans culture and music. The program this year was varied, covering everything from slick funk to modern mainstream jazz, a brass band, vocal soul jazz and the upcoming sound of New Orleans today.

Six City Stompers opened the festival with their untraditional take on traditional jazz music with strong ties to New Orleans. Mads Mathias is the band's singer and saxophonist and one of Denmark's best crooners along with Bobo Moreno, who also played at Fringe Jazz. Mathias and the rest of the band swung using instruments such as banjo and flugabone, but added a modern approach to the music. One of the joys of hearing the band is to experience the simple joy they transmit. In the garden outside Pumpehuset, a varied audience of all ages, many wearing yellow Fringe Jazz sunglasses, clearly enjoyed the music and the notes mixed with the scent of the Cajun food provided by street kitchen El Jefe. The concert ended with a true New Orleans classic "Little Liza Jane" and the scene was set for native saxophonist James Martin and his band.

Martin was here, there and everywhere during the festival, but one of his main gigs was with his own band. Back in 2017, he released the album Something's Gotta Give. This album was showcased at his concert in Pumpehuset with tight funk pieces such as "Maintain Composure" and the title track. Instead of a bass, the bass notes were provided by a giant sousaphone with a banner saying James Martin Band. Martin's tone on the horn is both gritty and smooth, at times resembling David Sanborn, and he also proved to be a good entertainer. However, the idea of filming the audience and taking a selfie came across as a bit tacky and was a reminder that social media is best avoided at a concert, but admittedly it was a good strategy to engage the audience.

The next band, New Orleans sensation Tank and the Bangas, also used mobil phones, but in a subtler way. The closing of the concert became a moment of unity with the light of the phones shining like twinkling stars. Until then, Tank and the band had steered the concert with dramaturgic precision and served a tasty gumbo of sounds, including hip hop, pop, R&B, jazz and heavy metal. Tank divided the audience into one's, two's and three's and made them battle against each other to show their excitement. The band created a theatre of movement with rock moves, cool play and robotic gimmicks and synchronic signs. However, at the heart of it all was a sincere desire to communicate through music and words. Thus, during the concert, Tank recited a freshly written poem about New Orleans. There was also a brief detour to Seattle with a surprising cover of Nirvana's "Smells Like Teen Spirit" that underlined the eclectic nature of the band where high decibel rock rituals were complemented by more mellow moments like the new single "Smoke Netflix Chill."

If Tank and The Bangas gave a glimpse of how New Orleans sounds right now, a concert in Prøvehallen with saxophonist Benjamin Koppel, bassist Bo Stief, drummer Alex Riel and pianist Ole Kock Hansen was a unique opportunity to relive the golden years of Danish jazz. A time, when giants like tenor saxophonist Dexter Gordon could be found in the country. Gordon actually lived in Valby so it was perfect that the homage to him took place right there. Kock Hansen, Stief and Riel all played with Gordon and hearing them playing together, it was evident what he liked about these great Danes. They can swing in a way that is hard to resist and when they served a piece of "Cheese Cake" from the classic Gordon album Go, they brought out all the flavors of the music. Stief with his thick, sliding notes, Kock Hansen with his flowery lyrical style, so melodically clear, and yet deeply drenched in the blues, and not least Riel, the master of swing. Playing with drum sticks in two different colors, his sound encompassed every variation in the rainbow, using simple elements like cymbal and hi-hat. Even when he made a classic drum solo, it was such a sweet sound of gentle thunder and not the bombastic parade that can be so tiresome.

The evening was divided into two concerts and the first had the theme Go. Those hoping that the band would play a complete recreation of the album might have been disappointed. The band dipped into pieces from the album like "Second Balcony Jump," but also took beautiful ballad detours like "I Want to Talk About You" and "Moonlight in Vermont." When asked if there was a story behind the choice of "Moonlight in Vermont," Kock Hansen laconically answered that it was a tune that Dexter liked to play.

Koppel had the impossible role of playing Dexter Gordon and made the wise decision of sticking to his own sound and the choice of the alto saxophone instead of Gordon's tenor saxophone. However, the quick passages didn't work quite as well as the ballads where Koppel dug deep into the material. Those wanting more Gordon could enjoy another concert titled 'Round Midnight the same evening and there was also a screening of Don McGlynn's documentary about Gordon More Than You Know with an introduction from the director. The documentary is currently available on YouTube.

The next day, the concert with Ole Kock Hansen's A Very Big Band provided an opportunity to hear Koppel in a setting that was more congenial for his instrument: the alto saxophone. The theme of the concert was a tribute to fellow alto saxophonist Julian "Cannonball" Adderley and iconic singer Ella Fitzgerald. In reality, it was mostly an excuse to play a lot of good standards and selections from the Adderley songbook, including the classic "Work Song," peppered with other songs like "Route 66" and the sweet Nordic samba "My Little Anna," written by the great bassist Niels-Henning Ørsted Pedersen.

Kock Hansen's big band was simply brilliant as it swung impeccably and brought out all the shades of the instruments in the great tradition of Duke Ellington, Count Basie and Quincy Jones. Kock Hansen's arrangements were justifiably praised by Koppel, including his arrangement of Duke Ellington's "Daydream," which Koppel said was the best arrangement he had heard of this composition. Kock Hansen had also arranged a Koppel composition for the big band, "At Large," a piece inspired by Adderley. The charts provided an exquisite carpet underneath Koppel while his saxophone was soaring, and the match was so successful that it whetted the appetite for more. Perhaps a whole concert revolving around Kock Hansen's arrangements of Koppel tunes could be an idea for another incarnation of the festival.

As it was, the concert was successful with a varied repertoire with pure big band tunes, solo spots from Koppel and standards sung by Marie Carmen Koppel whose powerful gospel-infused vocal is a refreshing take on the jazz tradition. Just as powerful as she can be, just as tender is her signature version of the standard "When I Fall in Love." In the end, it was hard not to fall in love with this music where Kock Hansen also showed himself as a dedicated orchestrator, at times egging the soloists to go on and other times showing his fists like a boxer to indicate more volume.

More great vocal jazz could be experienced at Fringe Jazz with the meeting between local Danish crooner Bobo Moreno and the Norwegian-based New Orleans singer Tricia Boutté. The theme was a tribute to Ray Charles and the concert included most of the famous hits sung by The Genius, including "Hit the Road Jack," "I've Got A Woman," "Mess Around," "I Can't Stop Loving You" and the hit above them all "Georgia On My Mind," sung beautifully solo by Boutté. The concert was a true feast of funky music with Moreno clearly enjoying being more gritty than usual and Boutté showed herself as a world class singer, but also as a wonderful entertainer. There were lots of banter and good music as the singers changed between solo spots and dripping duets. It was a warm way of embracing tradition and a perfect way to sum up the first days of both Summer Jazz and Fringe Jazz Fest.

Both Koppel and Bylling Lang have created festivals that are just as much communities as they are a grouping of concerts. With Nanna Rebecca Lindqvist, who is involved with both festivals, the future is taken care of as well. She is arranging her own jazz festival for kids, providing a perspective for future listeners who are susceptible to the sounds and traditions represented by Summer Jazz and Fringe Jazz Fest. Part of the festival involves an idea of illustrators of children's books, who interpret the music in pictures while it is going on. It is a good way of illustrating the core concept of play and improvisation in jazz music. The lesson is clear. Jazz should be open to improvisation, historically conscious and musically ambitious, but it should also be diverse and fun and open to everyone.