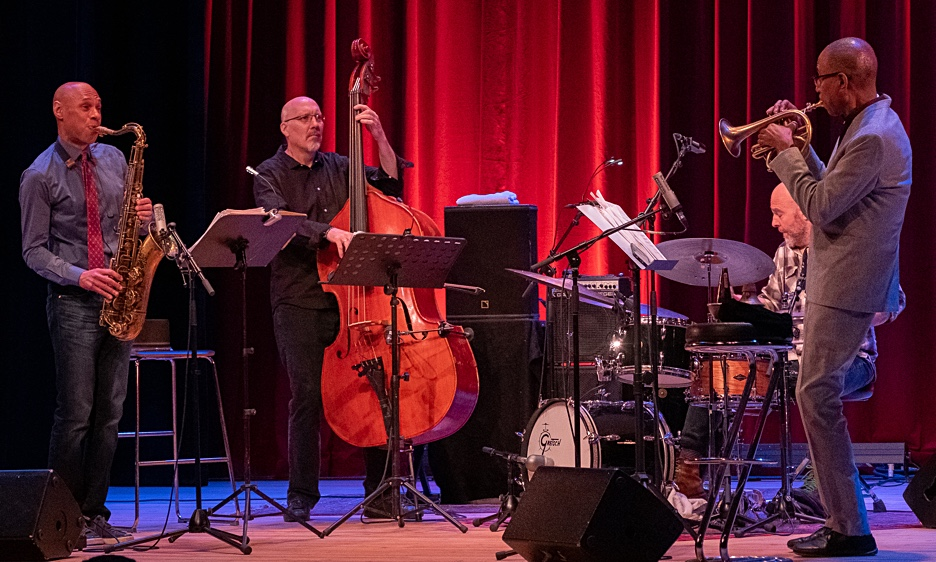 One of the best things about Copenhagen Jazz Festival is that it is not just one festival, but many festivals in one. During the festival, each corner of the city is filled with music. It is not only the center, but every part of the city that participates in the celebration of jazz. It is outside and inside and the same thing goes for the genres that cover the most experimental offerings and immediately accessible mainstream jazz.

As festivals within the festival, both Summer Jazz and Fringe Jazz Fest have made it a priority to reach out to a broad audience without losing the adventurous spirit of jazz. Through the years, the festivals have established themselves as go-to-places for good jazz with solid ties to tradition and a progressive spirit. This was also the case this year.

The program of Summer Jazz provided some of the headliners of the festival. It was a scoop to have tenor saxophonist Joshua Redman playing at the Betty Nansen Theatre with his Still Dreaming quartet. The name is a reference to a record from 2018 where Redman salutes the band Old and New Dreams (1976-1987) that included his father, tenor saxophonist Dewey Redman (1931-2006). In fact, the band was a kind of tribute to alto saxophonist Ornette Coleman. All musicians were associated with Coleman and the group had a line-up that mirrored his piano-less quartet with saxophone, cornet, bass and drum. This constellation also forms the core of Redman's group that includes bassist Scott Colley, Ron Miles on cornet and drummer Dave King.

King was the only one who didn't play on the original record that featured Brian Blade and the gig was actually his first, but as Redman remarked: "he plays as if he owns the music -and he does." The joy of playing the music was clearly felt on King's face and he was constantly attentive as he reacted to the sounds around him.

The repertoire was partly taken from Still Dreaming (Nonesuch, 2018) and used the opener "New Year" as the starting point. The melodic and yet complex theme was the perfect way to introduce the bandmembers that all played solos. The fast speed of bop was felt in serpentine lines with glowing brass in unison, but the composition also sported inventive solos and good grooves. While the form was complex, it was possible to follow the lines as they met, broke away from each other and met again while the tempo changed in an energetic dance. The tension between high and laidback tempo and cool and intense tones continued with compositions like "Haze and Aspirations" and "It's Not the Same" and King changed between the hard sound of sticks and the soft touch of brushes.

A brand-new composition, "Bad Algorhythm," showed promise for the future while the closing ballad by Charlie Haden, "Silence," was a memorable coda to a concert that embraced all the best qualities of jazz. It was intellectual music with an edgy understanding of harmony and texture that never became emotionally anemic or lost the sense of melody, swing and groove.

While Joshua Redman unfolded storytelling through the clear use of melodic lines, Benjamin Koppel had created a suite that combined his compositions with singer Cæcilie Norby's words based on conversations with his Jewish ant Anna who fled from the Nazi regime and found a sanctuary in Sweden. The suite tells about her struggles and dreams, but most of all, it is a homage to her personality and music and these two things can't be separated. Like most members of the Koppel family, Anna loved music and the dramatic composition "Dying" was a touching testament to the power of music. As Norby sung about Anna: "I recall playing all night long / Exploring worlds of music / Music that would soothe my soul / My spiritual church / Cathedral of my heart / Piano is my God."

Norby was in good company with a top-drawer quartet with pianist Kenny Werner who sprinkled stardust from his piano and drummer Morten Lund who was dubbed the "drum-magician." The bass was in the safe hands of Jesper Bodilsen, who also plays with Lund in Italian pianist Stefano Bollani's quartet.

Koppel himself took epic flights on the saxophone and the string orchestra DUEN added further contrasts as the strings drifted in and out and supported the dramatic arc of the music. Originally conceived as a piece for quartet and voice, it was the first time the suite was played with strings and hearing it that way it is hard to imagine the piece without them. The strings gave the music that extra orchestral sweep without making it too heavy. They cleverly supported the themes and storylines and added extra atmosphere and texture. Hopefully Norby and Koppel will choose to keep the strings if they record the music.

Later in the evening, Koppel resurfaced with another group led by Kenny Werner billed as COALITION. It consists of Werner, Koppel, guitarist Lionel Loueke, drummer Ferenc Nemeth and saxophonist Miguel Zenon. They released their self-titled debut on High Note Records in 2014 and explored the repertoire of that album with the compositions: "Wishful Dreaming," "Swan Song" and "Tune 4." The latter two were introduced ironically by Werner as having "an interesting story" that turned out to be quite simple. "Swan Song" simply needed a title and "Tune 4" was the fourth tune in a row.

Fortunately, the ironic approach was balanced by real human warmth and joy of playing and while it started out a bit too searching, bordering on meandering, the music developed momentum and unfolded beautifully. Loueke's mesmerizing voice and processed guitar playing was a clear strength, but he also kept the music grounded, playing thick bass notes on the guitar in the absence of a bassist. Zenon was also absent, but as the only horn Koppel filled out the space without problems and his composition "Global Danger" was one of the highlights of the set where Nemeth delivered a stunning drum solo with the double attack of percussion and wordless chanting through vocoder. Other highlights included the aforementioned Werner-compositions and the concert was wrapped up perfectly with a standard that sounded like "Someone to Watch over Me."

If the concert with COALITION represented the artful side of Summer Jazz, then a celebration of Aretha Franklin was a sure crowd-pleaser. Koppel had enlisted a topnotch-group with pianist Soren Bebe, bassist Jesper Bodilsen and drummer Morten Lund and no less than four different vocalists: Maria Montell, Marie Carmen Koppel, Kaya Brüel and Christina Boelskifte. Together they covered all phases of her career from her early jazz days to her classic soul songs and of course her hit "Think" from the soundtrack to Blues Brothers, one of Koppel's favorite films.

Highlights included Boelskifte's reading of "Daydreaming" and "(You Make Me Feel Like) A Natural Woman" sung by Koppel's sister Marie Carmen Koppel. With her background in gospel and jazz, she was the perfect interpreter of Franklin. However, all singers did a fine job of complementing each other and used sweet harmony on Burt Bacharach's "I Say a Little Prayer."

There was also a relaxed feeling with brother-sister banter and little gimmicks like a solo by Bodilsen where both Bebe and Koppel faked waiting impatiently while Lund started mimicking knitwork with his sticks! No patience for long, artful solos, but Bebe surprised as a piano solo entertainer with fire in the tangents. Egged by Koppel, the normally subdued lyrical Nordic pianist delivered his best Latin impressions of Michel Camilo and received several rounds of applause.

Koppel also had an anecdote up his sleeve (true or false?) of inadvertently bumping into Franklin as an impressed teenager in New York too busy looking at skyscrapers to see what is going on down on earth. This lack of respect caused by the accident naturally became the introduction to "Respect."

This feel-good concert ended with "You've Got a Friend" and indeed it felt as a friendly musical party and it was a warm and respectful homage to Aretha Franklin.

It would not be wrong to say that Summer Jazz and Fringe Jaz Fest are kindred spirits. They are both jazz festivals to the bone and aware of jazz tradition and know how to reach a broad audience without compromising the quality of the music. Last year Fringe Jazz did an homage to Ray Charles and so it was fitting that Summer Jazz did an Aretha Franklin celebration this year. All the pieces of the puzzle came together at the concert with the American drummer, singer and jazz-soul sensation, Jamison Ross.

Before Ross entered the stage, the Tribe of Gumbolia warmed up with traditional Indian New Orleans music. The tribe with Queen Tajh Williams, Chief Terrance Williams and Chief Eric Burt Sr sang such classics as "Iko Iko," but also weaved their own stories into the music. Clad in detailed outfits with many-colored feathers, the answer to the question asked by Chief Eric Burt Sr came without hesitation. "Aren't we pretty?" "Yes!"

After the uplifting session with Tribe of Gumbolia, Jamison Ross played with his trio and he started out by promising "A Mellow Good Time" with the opening track from his latest album All for One (Concord, 2018). Indeed, the promise was fulfilled as Ross picked choice cuts from his two albums and did a successful cover of Paul McCartney's "Yesterday." With his smooth and soulful voice, Ross was able to go everywhere and engaged in gospel-like call and response patterns with the audience. He combined soul, jazz and sophisticated pop in a wonderful stew and threw in Louis Armstrong's "What a Wonderful World" as a jazzy afterthought. He also delivered a stunning drum solo starting with melodic patterns that slowly gave way to a subdued beat like a heart that gradually increased and became a cosmic explosion.

Navigating between topics such as love ("Call Me"), being a father ("Away") and the complex landscape of human emotions ("Emotions"), Jamison Ross showed himself as a true jazzy soul singer in the tradition of Aretha Franklin and it all came together when he said: "I can feel Aretha Franklin is in the house." Ross was carrying the torch of Franklin in his own way and showed that soulful jazz and jazzy soul with a message is not just a thing of the past. It's very much a sound of the future.

Trombonist and singer Michael Watson, who has played with Ross, also showed that the sound of New Orleans is still evolving. He played a concert at Fringe Jazz with Swiss pianist Frank Salis, bassist Jonas Starcke, drummer Niclas Bardeleben and not least saxophonist Johan Bylling Lang, the organizer of Fringe Jazz Fest. They took off immediately with a mix of original blues, jazz and soul. Watson played a funky trombone and his voice easily spanned deep, gritty blues and silky falsetto. Salis was something of a showman who had a hard time sitting calmly on his piano chair. When not literally jumping with joy while playing, he left the piano to interact with the audience.