By DOUG COLLETTE
July 28, 2018
Sign in to view read count
Blues Deluxe is a regular column comprised of pithy takes on recent blues and roots-music releases of note. It spotlights titles in those genres that might otherwise go unnoticed under the cultural radar. 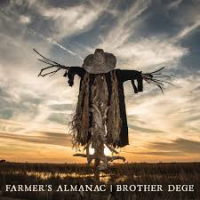 Brother Dege is in no hurry on Farmer's Almanac. He and his accompanists The Brethren proceed patiently on "Partial to the Bitters," subsequently proceeding apace as if hell-hounds are on their trail, while "Country Comes to Town," all resonators and heartbeat rhythm, sounds like just a respite from such a chase. Haunting, seductive qualities permeate the man's fourth album, even with the borderline frenetic "The Shakedown" because these musicians follow the lead of their eccentric leader during the sparse purity of these eleven tracks: a song like "The Moon and The Scarecrow" can hit home as deeply on a personal level as it resonates on a symbolic plane. And without a hint of irony, but a rhythm section kicking ass, this Louisiana musician (and author) rides "Whiteboy" toward the close of an album (on a ghostly instrumental take of the aforementioned opener) that is indeed the complete package it is intended to be, right down to the vivid triple-fold cover graphics. 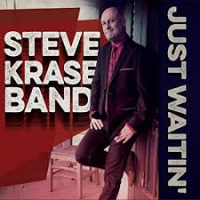 If it were not for the authenticity of his harmonica playing, it might be difficult to tell if Steveis serious here. But his playing is no-nonsense stuff, as is the musicianship around him, including David Carter's guitars, which plumbs guttural depths with the leader's instrument on on "Just Waitin' On My Brand New Baby." As a result, if seeing these ten tracks include one titled "The Ballad of Jed Clampett" (yes, the song used as theme for "The Beverly Hillbillies!?) gives some pause, it's just passing respite from the romping likes surrounding it in some form or another. "All in the Mood " a song written by Howlin' Wolf a/k/a/ Chester Burnett, is just one of a pair authored by the blues icon, an object lesson in how high spirits can be antidote to the dread of the blues as graphically depicted during the six minutes plus of "Nobody Loves You;" juxtaposed with an original of this album's co-producer (with Krase) and engineer, Rock Romano, "Blame It All On Love," it is fully in line with the largely high-spirited piece surroundings, all of which Steve Krase's instrumental catharses keynote. 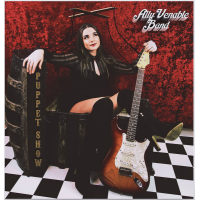 The sultry poses by the namesake of the Ally Venable Band wouldn't mean much if the nineteen year old couldn't strut her stuff with the guitar that's also prominent in the photos on the cover of Puppet Show. Venable's torrid interplay with Gary Hoey on "Devil's Sun" opens a veritable floodgate of hard rock cum blues she infuses with a no-nonsense attitude that only elevates the credibility and physical impact of the ten cuts. Add in the fact the woman composed all but two of the songs here and her creative potency becomes certified. Kudos to producer/engineer Rock Romano for capturing the volcanic flow of the trio, including bassist Bobby Wallace and drummer Elijah Owings, and not just at the highest volume or intensity: there's more than a little measured interaction on "Cast Their Stones" and "Backwater Blues," where Venable and company prove how thoroughly steeped they are in the traditions of the blues genre and its contemporary metamorphoses a la Jimi Hendrix. 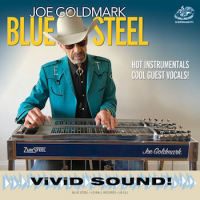 Pedal steel fanatics whether traditional (Red Rhodes, Jay Dee Maness) or unconventional (Sneaky Pete, Buddy Cage) ought to be equally delighted with Joe Goldmark's latest work. This collection showcases original songs, plus a diverse mix of cover tunes ranging from Bob Marley, Graham Parker, B.B. King and Jeff Lynne, which taken together mirrors the artist's versatile approach to his instrument. Best known for his honky-tonk country and Americana sounds, Goldmark has seasoned this experiment with the addition of blues/roots songs like "All Night Worker," "The Wobble" and "Beautician Blues," but those selections also utilize a range of instrumentalists on guitars, saxophone and vocals in artful fashion. And by intermingling the cuts with singing (one sterling instance of which is this rendition of Graham Parker's "Howlin' Wind") with instrumentals such as "I Want To Be With You Forever (featuring guitarist Jim Campilongo), the track sequencing accentuates all the other virtues of this record. 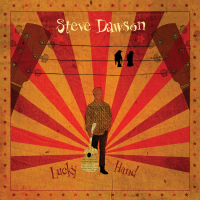 In its grasp of original style more than a little comparable to Brother Dege's album, Steve Dawson's first record of instrumental music since 2014's Rattlesnake Cage, is comprised of ten self-produced tracks including solo, duo and full-bodied string work. It is chamber music of a rustic sort, all the more compelling to hear because Dawson and his accompanists refuse to hew to many conventions apart from their carefully-configured arrangements; cerebral as is this self-imposed structure, a definite sense of improvisational spontaneity arises from the record , before too long, a physical momentum becomes palpable. Evocative in ways both pastoral and cosmopolitan, this record is quite probably unlike anything else even the most avid musiclovers will hear this year and, because of that, it will no doubt be one of the most satisfying over the long term as well.

Tracks: Settin' the Woods on Fire; I Don't Mind; Just Waitin' On My Brand New Baby; Irene Irene; The ballad of Jed Clampett; All in the Mood; Dirty Dirty; Blame It All On Love; Nobody Loves Me; My Baby Walked Off.

Tracks: Devil's Son; Bridges To Burn; Cast Their Stones; Back Water Blues; She Caught The Katy (And Left Me A Mule To Ride); Puppet Show; Comfort In My Sorrows; Survive; Waste It On You; Sleeping Through The Storm.

Tracks: Night Flight; All Night Worker; A Love So Beautiful; Ginger Ale; The Wobble; Warm Rain; Howlin' Wind; Natty Dread; Look What Thoughts Will Do; Tacky Tango; Beautician Blues; I Wanto To Be With You forever; True Love Travels On a Gravel Road.