By GLENN ASTARITA
June 8, 2012
Sign in to view read count 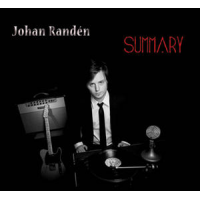 Johan Randen is amassing a notable reputation in Europe as a nascent guitar-slinger and session ace. On 24 year-old Swede's third solo outing, Randen conveys guile and exemplary technical acumen. The album also signifies a resume that highlights the guitarist's diverse bag of tricks and comprehensive vernacular, while projecting a comfort zone within several genres. With guest musicians lending a hand on several pieces, Randen also performs on bass, piano, and keyboards.

Randen doesn't reinvent the wheel, but works through several formats amid his clear-toned guitar phrasings and shrewd use of distortion techniques, intimating a strong penchant for dynamics. His arsenal includes blistering boogie vamps, C&W, contemporary jazz, jazz/funk, and progressive rock.

The guitarist picks his spots wisely and builds tension to heighten the intensities of select passages. He's also adept with balladry, evidenced by the acoustic-electric "Sky Express," designed with a windswept melody atop a steady backbeat. On "E.R.T.," he belts out a Joe Satriani-type rocker via an in-your-face gait, amplified by his howling notes and intricately articulated phrasings. And the funk-groove element resurfaces on "Cheese & Miller," firmed-up by his slapping bass parts and trumpeter Ingemar Andersson's bronzy choruses.

Randen zooms in for the kill but also shows restraint and delves into the core compositional attributes as opposed to fueling a conglomerate of extended solo jaunts. He's a slick picker, but focuses more on the big picture. Possessing imposing chops and a sophisticated musical stance, it would appear that the best is yet to come.