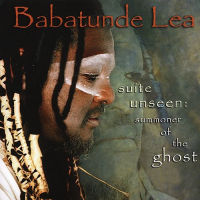 Suite Unseen: Summoner of the Ghost is yet another practical reminder that one should never judge an album by its cover. Or its shamanistic title or overwritten liner notes, for that matter. What looks conspicuously like a sprawling world music effort is actually a relatively straight-ahead jazz session linked by African folk chants and Afro-Caribbean polyrhythms. That might explain why the small print on the reverse side advises clerks to "File under Jazz" instead of the less frequented areas of the record store.

Suite Unseen, Lea's fifth outing as leader, kicks off with bassist Geoff Brennan's vamp, a conga roll, and then Glen Pearson's firm piano underscoring, and soon throws itself headfirst into a groove powered by the brawny horn section. Trombonist Steve Turré—a prominent Bay Area musician, like Lea and many other performers here—gets a full workout on his short solo, showing his range from grumbles to squeals before being joined by saxophonist Richard Howell. Titled "Ancestral Stroll" (and the first of the proper "Suite Unseen" tracks), there is nothing either ancient or ambling about this opening number. It comes across as fresh and urgent.

Turré's "Motivation" is a bit quirkier and jerkier, though it features that same fat horn section working in unison. Turré has another fine solo, shifting effortlessly from staccato to smooth lines; Howell goes straight for smooth. Together with Lea they shake up the standard solo protocol a bit, throwing back and forth to one another for the last minute or so. "On the T.L." continues the jaunty mood one last time before Howell's subdued ballad "A Song for Ani." Lea accentuates the track with cymbal splashes and rumblings like distant thunder. "The Bay Area's Afro-Latin Funky Love Shuffle" is a swinging, feel-good track penned by Howell—though it sounds slightly more Big Apple than Bay Area.

"Invocation," a percussion solo, precedes the smoke-and-whisky Turré chart "Inconspicuous," but it more-or-less delineates the overtly African-inspired part of the disc dominated by Lea's own compositions and his unifying thematic thread. Beginning breezily enough, "Suite Unseen: The Unseen" makes a few ominous departures and then builds into a kind of collective ecstasy. The ensuing rendition of James Taylor's "Fire and Rain" runs entirely contrary to this (the "flow" of the disc Lea mentions in the liner notes requires a huge imaginative leap)—a bright, swinging number replete with finger snaps that seems to overlook the latter half of the title. It closes with the group chant, "I've seen fire and I've seen rain" (repeat indefinitely).

"Chants from Home" is similar, with Lea invoking the ocean deity Yemaya by following an old Yoruba chant, slowly segueing into the spiritual refrain "Sometimes I feel like a motherless child," which in turn segues into the succeeding track, "From Home." In the final movement, a George Clinton-style funk jam, Lea literally shouts out across the spiritual divide to family members and musical forerunners, an apt way to close out this lively, inspired (in the strictest sense of the word) disc.