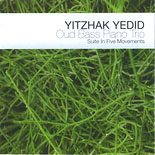 Award-winning Israeli composer/pianist Yitzhak Yedid is a paradox of sorts. His methodology consists of music without boundaries and he's difficult to pigeonhole, which is all good of course. Other than his numerous commissions for various arts-related formats, his overall muse combines an aesthetic that teeters between jazz, new music, avant-garde, Middle Eastern folk and much more.

Suite In Five Movements, released by the bleeding-edge German progressive Between the Lines label, signifies a unique convergence of various cultural elements that provide the core mindset for the unorthodox instrumentation. The artist yields a ripe fruit founded upon myths, prayer and Eastern modalities amid seamlessly exercised sojourns into contemporary classical and freeform improvisation. More importantly, Yedid professes a singular voice throughout this album and past accomplishments.

On the opener "First Movement," bassist Ora Boasson Horev renders a solemn bowed-bass passage that elicits a rather dour outlook, or perhaps a backdrop for mourning. Contrasts abound, where the piano-oud- bass alignment delves into jubilant Mid-East unison phrasings and minimalist-like choruses. It doesn't end there. These five movements project a symbiosis of emotive attributes, where dark voicings give way to evolving plots.

Yedid's carefully constructed works are engineered with periodic intervals of mystical frameworks, largely induced by oudist Mikhail Maroun. Then, in other regions of sound and scope, Yedid leads the unit through daintily crafted lullabies amid a few introspective solo piano spots. Yedid's musicality resides on a higher plane while offering bountiful panoramas for the mind's eye.