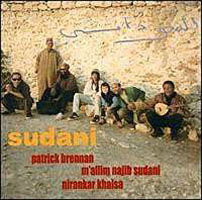 Blowing in like a hot dry desert wind, Sudani takes you aboard a Moroccan caravansari whose cargo includes soulful New York free alto sax and Mississippi blues. The Sudanis-Njib, Bujmaa, and M'barek-provide the Gnawa, playing hand drums and the guinbri, a low pitched string instrument. Their music provides soundtrack for an ancient night long ecstatic ritual, and jazz musicians from Pharoah Sanders to Maceo Parker have sought to jam with other musicians in the lineage. Here, hard blowing avant jazzer Patrick Brennan brings big ears, an open mind, and vivid imagination to an alto that sears like a sandstorm. Adding crisp trap drums, mellow bamboo flute, and improvised vocals and lyrics that uniquely take the blues home, Chicago's Nirankar Khalsa links the past with the future.

Najib's guinbri sets the stage, quickly joined by call and response vocals and Khalsa's rhythmic cymbal work. Initially lurking on the edges, Brennan snakes a ragged reed through the hypnotic Gnawa riff. Hand claps, exotic percussion, and chanting climax with the rubbery rhythm of the guinbri. Khalsa's drums set starts "in the Tagine..." running, with Brennan lyrically inspired, and the Sudanis rolling like thunder.

Khalsa's bamboo flute leads the improvisation on "Timarmalia Blues." Najib takes over and Khalsa launches into a blues vocal based in the guinbri's pattern. The Sudanis sing their own call and response song with Khalsa's flute fluttering. A playful phrase of Brennan's starts ..."Greasin." The other players are quick to join, keep the driving momentum throughout.

The first half of "t'bal'n'tumble" features rock slide drumming setting up the hot coals for Brennan's fire dance. He howls and shrieks, driven by the passionate percussion into extended highs and swoops. His ecstatic runs push the drummers into frenzy. Najib and Brennan chat to open "aroundSidi Hammu," and a singer contributes a short song, his phrases answered by Brennan. He then takes the alto for a long inventive run. A short, meditative acapella improvisation by Brennan finds accompaniment in the soft chirping of birds. Khalsa closes the collection with a spirited call and response, and driven flute solo.

Brennan and Khalsa's collaboration with the Sudanis builds bridges over surprising common ground, enriching and expanding their musical languages in the process.