The Eric Starr Group: Such Is Life

By EDWARD BLANCO
March 3, 2014
Sign in to view read count 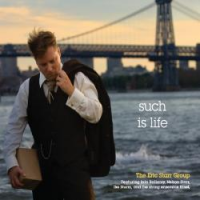 Drummer Eric Starr is not a purist of any kind, in fact, he has always been interested in "genre bending" when it comes to his playing and draws equally from both jazz and rock drumming styles on this album. Along with brother Nelson—both third-generation musicians from Western New York—the duo created The Eric Starr Group (ESG) as a showcase for Eric's music and Nelson's tantalizing vocals and together they bring forth their second album Such Is Life containing elements of traditional, classical, bossa nova and modern jazz with orchestrations from the ETHEL string ensemble for an adventurist touch. As leader of ESG, Starr is showcased throughout not only on the drums but also on the vibes, keyboards, additional piano and percussion while Nelson is the featured vocalist and pianist of the group.

The ESG is a core quartet with British saxophonist Iain Ballamy and Ike Sturm on the bass and for this recording adding a trumpeter, French horn and a guitarist along with the string ensemble resulting in an exciting mix of sounds making this a pleasurable musical journey to experience. The drummer opens the music with an extended drumming solo on the beginning "Can Spring Be Far Behind" featuring Ballamy and Nelson on guitar on pronounced solos. Three of the most compelling pieces follow each other from track two through four starting off with "The Conjuror" featuring Nelson's vocals, soft piano keys, a sax solo, Jeff Miers on guitar and the Leader's turn on the vibes with some strong Sturm bass work to back it up.

The other two pieces of note, "Dream Me Part I" and "Dream Me Part II" with Nelson stretching his vocals on the first while the latter takes on a different melody played mainly as an instrumental with the string ensemble coming to the fore with a spacious performance. The soft spot of the album goes to the gorgeous title track highlighting Nelson's smooth vocals, a little piano foray and Ballamy's tender tenor saxophone voice—all backed up by the ETHEL strings for a beautiful touch. The group ventures into the progressive side of things on the stellar "Quietude" featuring one of the leader's plentiful solo moments followed by more of Starr's drumming prowess on display on the "Drum Solo" piece.

The infectious music starts to wind down with a bit of scatting from Nelson on the sizzling "In The Spirit" that features a Latin-tinge, a feisty saxophone solo and of course, another solo shot from the drummer capping off an excellent spiritual experience. A multi-talented musician, Eric Starr's jazz star may well be rising above all expectations and Such Is Life may be the reason why. Starr and ESG deliver an exceptional album, a gem of a recording that truly sparkles all over. Brother Nelson and the well-designed orchestrations of the strings play a major role here and one sample of this session, will be enough to convince anyone.

Can Spring Be Far Behind; The Conjuror; Dream Me Part I; Dream Me Part II; Such Is Life; Commotion; Quietude; Drum Solo; In The Spirit; For Better Or For Worse (for M.A.N.).

Title: Such Is Life | Year Released: 2014 | Record Label: Self Produced

About The Eric Starr Group