Lol Coxhill and Roger Turner: Success with your Dog 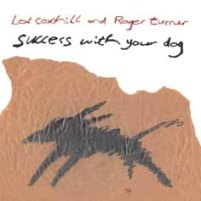 Saxophonist Lol Coxhill and drummer Roger Turner go back a long way. They first played together in the early '70s and ever since they have come together regularly in a variety of settings, including The Recedents, their trio with guitarist Mike Cooper. Recently, they have most often played as a duo, and remarkably, Success with your Dog is their first release as a duo; for that reason, it is a welcome arrival. Three of its tracks date from a 2003 tour of France and a fourth from 2010 concert at St. Leonard's church, Shoreditch in London.

Saxophone-drums duos are rare, usually producing something a bit special and always making interesting listening. The format exposes both players to scrutiny and there are no hiding places. So it is here. As is fitting, Coxhill and Turner are equal partners in the duo, with constant ebb and flow between them as they take turns to lead and set the pace. Neither of them allows that pace to flag; they produce a torrent of ideas that are delivered as a seamless stream. There are no signs of their familiarity leading to complacency or playing in the "comfort zone."

At nearly twenty-five minutes, the opening track, "Paying through the Nose," is an epic which showcases both players strengths individually and together. From the first notes, it is obvious that Coxhill and Turner are familiar with each other's playing. There is no need for a tentative introductory piece and they are both straight into their stride.

Coxhill plays soprano sax throughout. He generates a variety of tones, predominantly his characteristic pure tones that can simultaneously produce feelings of melancholy and a wry smile—a neat trick. Despite the praise and plaudits his playing receives, it is too rarely credited for its fragile beauty. However, Coxhill shouldn't be taken for granted. Without warning, by altering his attack or embouchure, he can instantly "dirty up" his sound, producing more rasping notes. There is never a dull moment when he is playing.

Duos of sax and drums demand more of the drummer than of the saxophonist as the drummer takes turns being the lead, as well as supporting the sax when it is leading. Roger Turner is ideally suited to these dual roles. In the spotlight he is a hive of activity, deploying his kit plus a varied assortment of percussion to create an ever-shifting array of sounds while always retaining the pulse. As a support player he has the knack of getting his dynamics just right; his delicate use of cymbals to gently underpin—and occasionally nudge—Coxhill, verges on being a masterclass. When appropriate, Turner is not averse to sitting out and leaving center stage to the sax. And when the context requires it, he also has no qualms about playing with the gusto of a traditional tub thumper.

Yes, Coxhill and Turner can rightfully take their place among the distinguished company that has recorded great sax-drums duos.

Paying through the Nose; A Collar Counts; Tails that wag: Groomed for the Job.