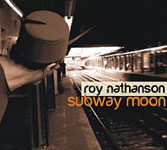 Subway Moon, alto saxophonist Roy Nathanson's ambitious new album of jazz and spoken word, defies easy categorization. It mixes an accessible brand of avant-garde jazz with R&B, hip hop, Jewish music and multi-vocal harmonies; poignant biographical revelations with humorous observations of urban life; high-art concept with a gritty New York street sensibility. This eclecticism should come as no surprise to those who've followed the co-founder of the playfully experimental Jazz Passengers through his collaborations with Elvis Costello and Deborah Harry and his forays into film, theater and poetry.

With the exception of a tender doowop reading of the O-Jay's hit "Love Train" (with fine vocal turns from trombonist Curtis Fowlkes and bassist Tim Kiah), all the tunes on Subway Moon are Nathanson originals inspired by his daily commute on the Q train from central Brooklyn to his Manhattan teaching gig. The portraits of underground life will draw nods of recognition from anyone who uses the subways and should have special resonance for those well-versed in his three overriding themes: jazz, Jews and Brooklyn. In his poems set to music (or is it the reverse?) riders hide from a crazed fellow passenger behind the day's headlines ("Safer End of Subway Moon"), an overheard conversation of a beautiful Russian girl leads to a hilarious disco fantasy ("Party") and a meditation on the terrorist threat warning ("Orange Alert") evokes thoughts on post-9/11 fears and follies. (A book-length collection of the poems delves deeper into family tragedies and includes a moving remembrance of Nathanson's father's final days.)

All this is merged seamlessly with invigorating instrumentation from a ten-piece band including, among others, longtime Passengers cohorts Fowlkes, Bill Ware (vibes), Brad Jones (bass) and Sam Bardfeld (violin). In place of a drummer, Napoleon Maddox is featured on human beatbox, while subway sound effects (and a clip of Allen Ginsberg, a major influence on Nathanson's poems) are provided by Hugo Dwyer's sampler. And in a nice family touch, Nathanson's 10-year-old son makes a cameo on trumpet. Most of these artists were on hand for a celebratory May gig at Joe's Pub, which proved that the artistry of the CD translates exceedingly well to the vigor of live performance.