By GEANNINE REID
October 13, 2016
Sign in to view read count 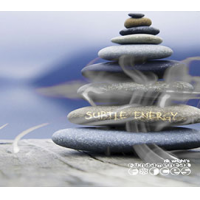 Guitarist Rik Wright returns with Subtle Energy, an album that continues his exploration of well-crafted originals and band chemistry, again in a quartet format, but with a slightly more relaxed approach to the music compared to his earlier quartet records. The Seattle-based guitarist's previous releases were based on a trilogy of primary colors, Blue (2013), Red (2014), and Green (2015). Make no mistake though, Wright is still bringing the heat and over the course of each composition the listener will find plenty of energy.

Surrounded by friends, Rik Wright's Fundamental Forces, consists of James DeJoie on clarinets, Geoff Harper on bass and Greg Campbell on drums. The longtime chemistry is obvious in the music, resulting in a quartet sound that possesses both that wonderful "initial encounter" energy, and a group telepathy that establishes an empathy between the individual players that only comes from time on the bandstand playing together. That best of both worlds catch all, makes Subtle Energy an outstanding outing that is rich with texture and musical depth.

"Butterfly Effect" is the first of five Wright originals contained on the project, all five songs were recorded during the colors trilogy, but for the recording each tune was given a new arrangement and orchestration. Subtle Energy is a studio album, but it was recorded live all in one take, with no overdubs. Wright's "Butterfly Effect" grooves mightily, with a relaxed refined modal color that opens with a vamp with Wright's slightly bright, warm, and woody tone that largely defines Wright's playing throughout the project. Wright has the ability to be a chops-meister, but has evolved into a story teller first and foremost. He constantly juggles the role of a technical player with that of lyrical melodicist, and while he clearly still has chops to burn, it's never in service of anything but the music. The near-classicism of DeJoie's clarinet playing on the opening track finds a perfect contrapuntal and harmonic partner with Wright. DeJoie's phrases are lithe and weave in and out of this ethereal composition with increasing confidence. The rhythmic team of Harper and Campbell create a stable, but flexible pulse for Wright and Dejoie's complex rhythmic, harmonic, and progressive solos to rest upon. The empathy on this track is excellent, it's clear that heart felt music is at the very foundation of this quartet and is the inspiration for this modern exploration.

Wright's mighty pen is in full force on "Patience." Wright has displayed that he understands that composition, not merely exceptional technique on the instrument, is at the core of significance to creating a musically successful project. That said, "Patience" displays Wright's skills as a pure master of musical colors, with sustained flawless voicings, leading to long lines and phrases of an extended melody played with DeJoie, the extruding tone of the guitar and clarinet is stunning. Wright's solo is refined and harmonically astute and his use of chordal figures gives the track a sense of full harmonic layers. Dejoie's solo is heart rendering, crystalline and emphases melodic contours. Wright and Dejoie trade phrases for the musical climax, displaying their mastery of linear phraseology.