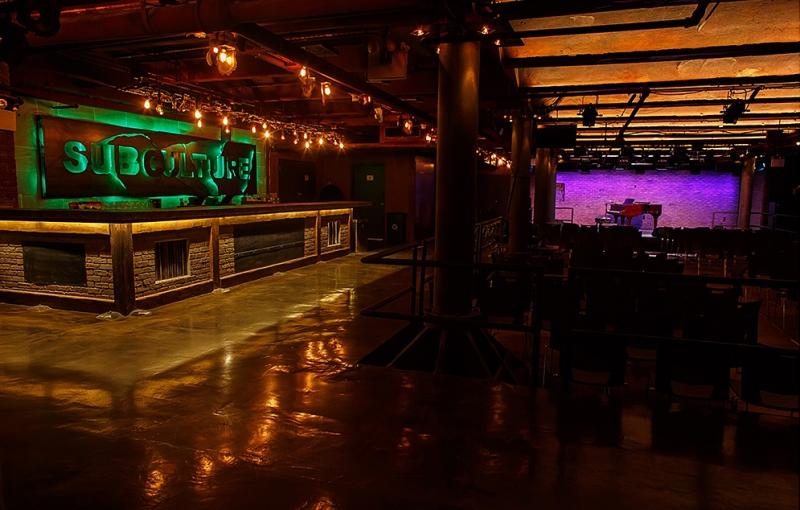 By SCOTT KRANE
September 18, 2013
Sign in to view read count
The art of recording has changed music, more so in the information age. Nevertheless, it seems consensus in New York: jazz sounds better live. SubCulture is a new performance space in the district of Manhattan that is called "NoHo." The building is located at 45 Bleecker Street right in front of a stop for the B, D, F, M and 6 trains. The recommended drink as per space owner, Marc Kaplan is the Liberty School cabernet and a semi-local brew, the Greenport seasonal ale. The suggestion of spirits is valuable coming from a man whose spot features a musical menu that is even more appetizing. Inside, folding chairs are set up for performance spectators. Before the musicians takes the stage, mellow banter hums amidst the familiar and low-played audio of Miles Davis's Kind of Blue.
Downstairs in the space, metal rafters grasp light fixtures and red bricks give the room a sense of homeliness. The underground location has a lovely, chilled humidity. The walls of the stairs connecting the entrance to the performance space are covered with prints of international and old-fashioned newspaper clips.
SubCulture's lights and acoustics are state of the art. Marc and brother, Steven Kaplan worked in conjunction with Alliance TCC "out of Connecticut" to "do overall design" for the room's artificial ambience and sound. You can see the specs on the Subculture website. As for the music, "We believe in programming artists that create a high level of artistry," said Marc Kaplan, "We believe in programming artists that not only showcase their own work but also draw on their influences and we believe in showcasing diversity in the music and in the art that we present."
"A Single Noon": A recital and CD release by Gregg Kallor

On a warm New York City evening in late May, Gregg Kallor took to the stage of the brand new underground performance space North of Houston Street and greeted his audience with glimmering charm before sitting on the piano bench to perform the movements from his latest solo piano recording, the delightful suite, "A Single Noon," released independently in April.

Mr. Kallor plays with patience and a refusal to refrain from shattering idols of musical influence. On May 30, he performed alone with the precise dynamics of a young creator, frequently teasing the audience with lines of gospel and bop. When it comes to styles of music, Mr. Kallor is not indifferent, but artfully fickle. Such movements from the new suite such as the flighty 'Espresso Nirvana,' the title track which he describes as a "tableau of life in New York City," 'Broken Sentences' and 'Night' show his versatility and carefulness of phrasing. The movement known as 'Strap Hanger's Lurch' displays an incredible use of the variation of rhythms with hints of ragtime written into the chart. The final result does not sound forced but nonetheless fun and refreshing.

Despite several erstwhile performances at Carnegie Hall and two European tours, Kallor might be considered a well-kept secret in the worlds of classical and jazz music. Nonetheless, an ever-increasing résumé is quickly pushing him to the fore of the list of notable musicians and composers to be on the lookout for. In March 2007, the now-35- year-old made his New York City concert debut at Carnegie Hall's Weill Recital Hall. His first CD release, "There's a Rhythm" was with his jazz trio and the follow-up "Exhilaration" was music written for and performed with operatic vocals, based on poetry by William Butler Yeats and Emily Dickinson.

The showcase recital at SubCulture was proof that Gregg Kallor is one of the bright stars on the horizon. Both his versatility as player and talent as composer is enough to get sophisticated music enthusiasts salivating for more. This is because there is something enticing about the mix of continents and styles and it is his success at accomplishing excellence as both a jazz player and classical composer that makes Mr. Kallor a humble master of his art. Both poetic and humorous, Kallor's composing reflects the music of the early twentieth century America before jetting ahead in time to the heyday of bebop, borrowing phrases from jazz greats, and then returning to the halls of contemporary music. The piece 'Giants' from the new record is a conceptualized Eliotian tribute to some of his teachers and colleagues, whom he claims he channels somewhat when performing and conducting.

His next album, the follow-up to A Single Noon will be a suite of chamber music. He describes it as "straight-up classical compositions" as well as "some stuff with rhythm sections and improvisers." He also "just finished writing a piano concerto with improvisation in its second movement." and will perform concerts with the lovely mezzo-soprano, Adriana Zabala, with whom he has performed and composed in the past, namely on Exhilaration (2008).

In the audience at the SubCulture performance were none other than acclaimed contemporary pianists Jenny Lin, Hiroko Sasaki and one Fred Hersch. Mr. Kallor has been studying with Mr. Hersch on and off since his days as a student at the New England Conservatory in Boston, more than a decade ago. Today, the relationship between Mr. Kallor and the jazz piano "titan" has "morphed"—as Mr. Kallor puts it—from apprenticeship to the relation of colleagues. For instance, he "sort of fell into being the musical director for his show 'My Coma Dreams,'" said Mr. Kallor. "I've been conducting the ensemble."

Of the aesthetic charms prevalent on Gregg Kallor's "A Single Noon," the use of rests and space is central. "Sometimes letting something breath is just as important as writing something and playing something," explained Mr. Kallor in an interview. "It is an important lesson, giving something the space to breath is more effective and affecting than just a constant chattering of notes" he said "I really wanted to emulate that feeling of spaciousness, there is that feeling you get when you look up at the skyscrapers in the street. It is like looking through the wide angle of a lens; it is a little calmer, more serene." There is a way to drench a written piece of music in mystery without sacrificing a key structure, and Gregg Kallor's music accomplishes just this. While the impressionist music on "A Single Noon" is not atonal, certain movements begin and end in different keys. This allows for the crosspollination of stylistic influences to tinge the final outcome. Of all of the musicians to be on the lookout for, the various projects of Gregg Kallor are sure to please just about any ear and quench the most sophisticated of tastes.

Gregory Porter: "There will be no love that's dying here..."

The audience was stomping feet and clapping hands. They chanted call-and-response while gazing excitedly at the performance on the stage. It was a special concert by Grammy-nominated jazz singer, the Los Angeles-born and currently Brooklyn-based Gregory Porter. 41-year-old songwriter and singer, Porter's music is still a throwback and decidedly educational review of more than a century of African American music. This music that Mr. Porter and his band perform is also a sure sign of life for the jazz tradition. The performance on Monday, June 10, opened with the song "Painted on Canvas." Japanese jazz guru, Yosuke Sato, the alto saxophonist was figuratively ablaze, blowing formidable solos with fierce force and kinetic electricity. Personality and pathos defined Sato's performance. The group roster was the same as on Mr. Porter's 2012 record release Be Good. (Blue Note Records) But for the sake of this performance, jazz trumpet star Keyon Harrold was added to the mix. Harrold did not walk onto the bandstand until the second number of the evening's performance, the driving, almost rock n' roll of "Way to Harlem," originally heard on 2012's Be Good.

"You can't keep me from where I was born/ I was baptized on my daddy's horn..." sang Mr. Porter with a bright smile on his face. This tune was followed by "No Love Dying" another spiritual boogie, "There will be no love that's dying here..." sang Mr. Porter, promising revelations of spiritual bliss and visions of freedom and rhythm. Tenor saxophonist Tivon Pennicott meshes quite well with the alto blowing of Sato. Sato's solos are inward, energized, personal, whereas Pennicott supplied almost academic responses, sticking to chord tones and carefully displaying a mastery of phrasing as he flew through extended statements.

The next number was a spiritual and rollicking, "Wolf Cry." The lyrics are written from the point of view of a savior who has been sent to Earth to gather the pieces of a young man's broken heart. The rhythm section, the astoundingly talented Chip Crawford on piano, the smooth professional Aaron James on bass and Emanuel Harrold on drums, kicked up a storm of invisible sawdust, challenging the audience in the small performance space to stay seated and not push their chairs aside.

Gregory Porter is a jazz singer, but he draws from an eclectic selection of influence. For this, Porter and his group of the most gifted of musicians (this side of the Delta) are a diamond in the rough. 'Hey Laura' was a special treat, a deeply soulful love song, performed in the style of smooth rhythm and blues played by a classic jazz combo instrumentation, "Hey Laura, it's me" petitions Porter, in an interpretation of John Donne's poem of unrequited love. After this, the traditional spiritual "Free" and "Musical Genocide" brought all the religious ecstasy and cultural sting of an especially moving Sunday morning in church to a Monday evening jazz performance in a display of musical excellence.

"Did you hear what that man said?/ Most of my people are damn near dead." sang Porter, while the audience hummed along and clapped hands in a spiritual procession of musical interaction. "I will not submit to musical genocide!" the singer declared. Here, there was a thundering drum solo, followed by a minimalist yet formidable scat performance. One new song was debuted during the evening's performance that featured the same two-chord vamp as James Brown's 'Get Up (I Feel Like Being a Sex Machine),' this became especially audible during the bridge section. The festive mood of the evening did not change when the band performed the standard ballad, "I Fall In Love Too Easily." Also performed was Nat Adderley's classic, "Work Song." Chanting, hooting and hollering and steady handclapping romped the basement performance space, along with impassioned audience call-and-response. Gregory Porter and his band are one of the promising jazz acts around today.