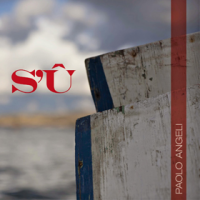 S'û is the sound of a master musician. The master in question is Paolo Angeli, a virtuoso player of the prepared Sardinian guitar (an instrument he has developed over the past 20 years). Angeli has worked with musicians from many genres—including jazz players such as Pat Metheny, Hamid Drake, Evan Parker and Fred Frith—developing an ever-increasing catalog of music for this unique instrument.

Angeli's 2014 live album with American percussionist Drake (Deghe, ReR Megacorp) was a powerful, rhythmical, collection. As a solo album S'û gives Angeli freedom to create a more varied collection, filled with subtle melodies and a wide range of musical moods and soundscapes. Angeli recorded the album without overdubs and with just 80 seconds of looping (on the title track). He wrote all of the tunes, with the exception of the traditional "Mi E La."

Stylistically, it's impossible to pin Angeli the composer down. Rock, folk, European classical music, jazz and the blues all find their place—"Tinta Unita" and "S'û" have flashes of classic Captain Beefheart. It's equally difficult to pin down the sound of Angeli's instrument—a cross between guitar, cello and drums, complete with hammers and pedals and with some of its 18 strings lying across the soundhole at right angles to those which run from bridge to neck. On the bright, high pitched opening to "Due Tempi" it emulates a piccolo; its lower register comes close to that of the double bass; on "Blu Di Prussia" it sounds like an array of early synthesizers, on "Mancina" it sounds like a flamenco guitar, on "Pastelli A Cera" it's an overdriven rock guitar (among other things).

Despite such diversity of styles and sounds S'û always feels coherent and cohesive. The result of this combination of composer and instrument is, quite simply, stunning. Angeli's music excites, delights, invokes smiles and laughter and, on occasion (such as the tense "Baragge" or the doomy final section of "Muri D'Acqua") tweeks those ancient fears that lie buried deep in the psyche.

The traditional "Mi E La" seems to reach back to an ancient place and time, Angeli's plaintive singing complemented by the guitar's dense layers of sound. In contrast, "Radio Libere" is an extraordinarily contemporary tune, on which Angeli manages to craft the sounds of marching feet, marimba beats, radio static and found sounds.

On "Vlora" Angeli mixes flamenco rhythm with edgy John Fahey-style phrases, flourishes of sitar-like sound and a melody that draws on English folk ballads. There's also a hint of the blues, of free jazz and of the lute. It's fascinating, surprising and joyous—three adjectives that equally well describe S'û in its entirety. A beautiful, life-affirming, album.