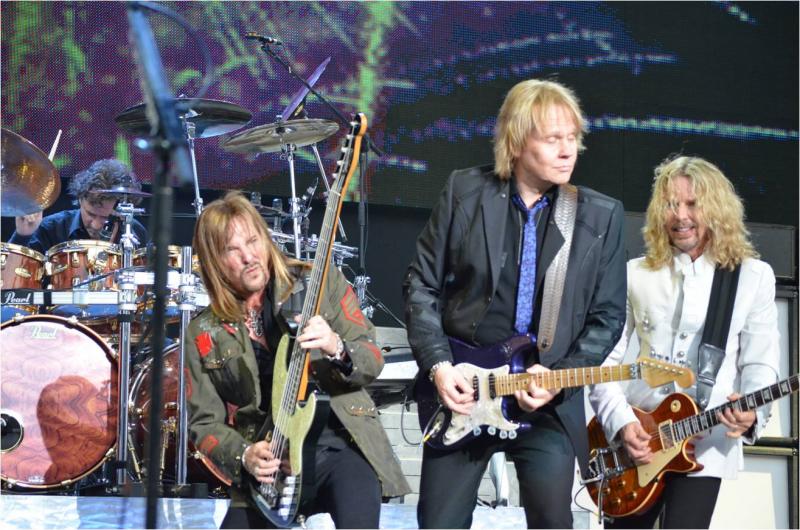 By MIKE PERCIACCANTE
August 6, 2011
Sign in to view read count
Styx and Yes, with special guest Shane Alexander
2011 Nikon at Jones Beach Concert Series
Wantagh, New York
July 11, 2011
The 2011 co-headlining Styx and Yes Progressive Tour rolled into Long Island, NY's Jones Beach Amphitheater on a windy July evening. Coming at the end of an exceedingly hot and humid day, the cool breezes that blew through the outdoor venue were just as welcome as the concert itself. Shane Alexander, a singer/songwriter/guitarist from Los Angeles began the evening with a short but very strong acoustic set. A crowd pleaser, the majority of the set came from Mono Solo (BuddhaLand Music, 2010), as Alexander proved himself a wonderful maitre d' and host, explaining he was very lucky to have been tapped to open for these bands and that both of the headliners were "nice, kind and welcoming."
Styx then stormed the stage (the bands are co-headlining on the tour, alternating first and second shows nightly), launched into "Blue Collar Man," and proceeded to blow the figurative doors off the venue. Windy, outdoor venues can be a nightmare for even the most seasoned soundman. And on this night, the wind caused some issues; the first two songs were slightly muddy, but once corrected, the sound was crystal clear.
This new (and some might say better) version of Styx featured guitarists/vocalists Tommy Shaw and James "JY" Young, along with bassist Ricky Phillips, drummer Todd Sucherman and keyboardist/vocalist Lawrence Gowan. Gowan, who has replaced the band's original lead singer, Dennis DeYoung, proved to be quite the showman. When he sang, he totally commanded the stage, with his vocals on "The Grand Illusion," "Lorelei" and "Lady" absolutely spot on, topping it off playing an outrageous stand-and-spin keyboard rig. 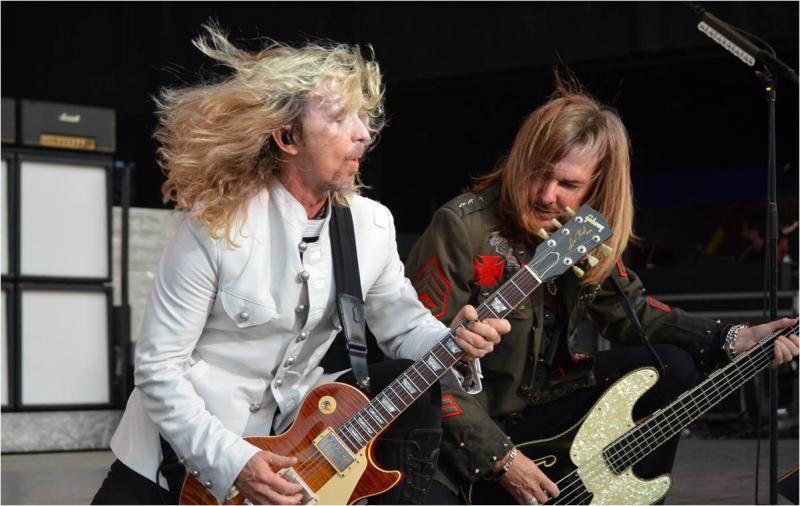 The charismatic Shaw was also in top form, his vocals sounding as if he had taken a time machine back to the band's late '70s/early '80s heyday. Both Shaw and James Young did not slow down, even for an instant, oozing energy and confidence as the band roared through "One With Everything," "Too Much Time On My Hands," "Man in the Wilderness" (a criminally underappreciated track from The Grand Illusion (A&M, 1977)), "Suite Madam Blue" (from Equinox (A&M, 1975)) and "Crystal Ball." Each song was greeted with rapturous applause, as many in the audience sang along and virtually all clapped their hands to the beat.

Shaw then announced that the band had a big surprise for the frenzied New York audience. The crowd exploded with delight as Shaw asked the crowd to "give it up for [founding member/bassist] Chuckie Panozzo." Panozzo and crew then thrilled the crowd by delivering a note-perfect rendition of "Fooling Yourself (The Angry Young Man)," but they were far from done. It was full-steam ahead, as the erstwhile bassist remained onstage, playing along with and trading bass notes back-and-forth with Phillips through stellar, robust versions of "Miss America" (with its staccato guitar and growling vocals) and the harmonious ballad into full-blown rock masterpiece "Come Sail Away." After leaving the stage for the briefest of moments, all six musicians came back to bring the house down with a single encore—a brilliant and rollicking version the Shaw-penned, bass-heavy "Renegade." It was a high energy, passionate, infectious, foot stomping performance from start-to-finish.

After a half-hour break, Yes took the stage for the second half of the evening. Though not the classic Yes lineup, the band provided a strong (but not quite ready for primetime, as this was only the sixth show of the tour) set of progressive rock. Touring behind Fly From Here (Frontier Records, 2011), released the next day, this latest incarnation appears to be still feeling its way through its back catalogue. With Benoit David now a full-fledged member (singing lead vocals on Fly From Here) alongside sole remaining founder, bassist Chris Squire, Yes performed many of its signature tunes, and also featured longstanding guitar virtuoso Steve Howe and drummer Alan White, as well as new/old keyboardist Geoff Downes, last heard with Yes on Drama (Atlantic, 1980). 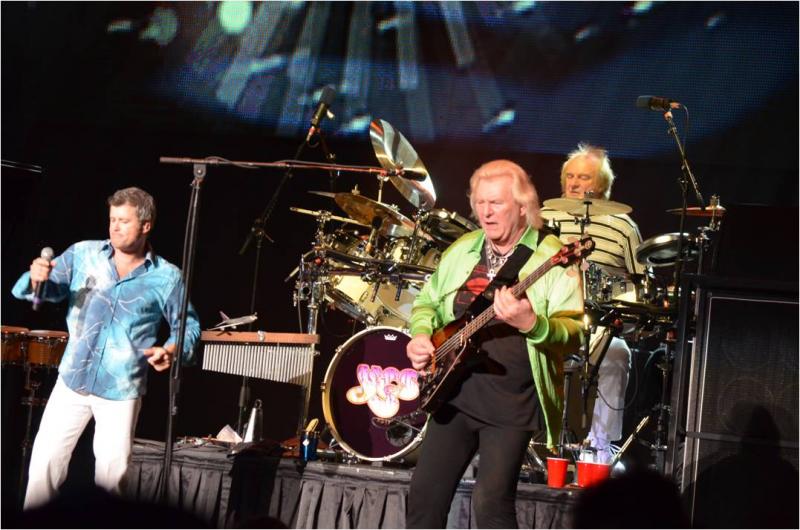 Following a prerecorded opening theme, the "Fly From Here Overture," the band kicked into Drama's "Tempus Fugit," the last Yes studio album to feature a singer other than Jon Anderson. The band started slowly, plagued by both the wind and what appeared to be a lack of sufficient rehearsal time. "Yours Is No Disgrace" suffered from issues with the tempo, and David seemed to have a few issues with his voice that might have been caused by the strong winds blowing off the water. Upon recovery, the veteran cosmic prog-rockers performed a nice set which included many of its signature tunes, including "And You And I" and "Owner Of A Lonely Heart," featuring Howe's personal spin on a solo originally recorded by Trevor Rabin on 90125 (Atco, 1983), as well as part of the excellent new title track/suite "Fly From Here." The show ended with an excellent version of "Roundabout" and an amazing encore of "Starship Trooper."

Not many would immediately think of Styx and Yes as a good pairing, but both bands have their fervent fans—and, in many cases, they like both groups. Most important is the fact that these two veteran bands treated the fans to three hours of great music—rock, pop and progressive psychedelia.