Styx at the NYCB Theatre at Westbury 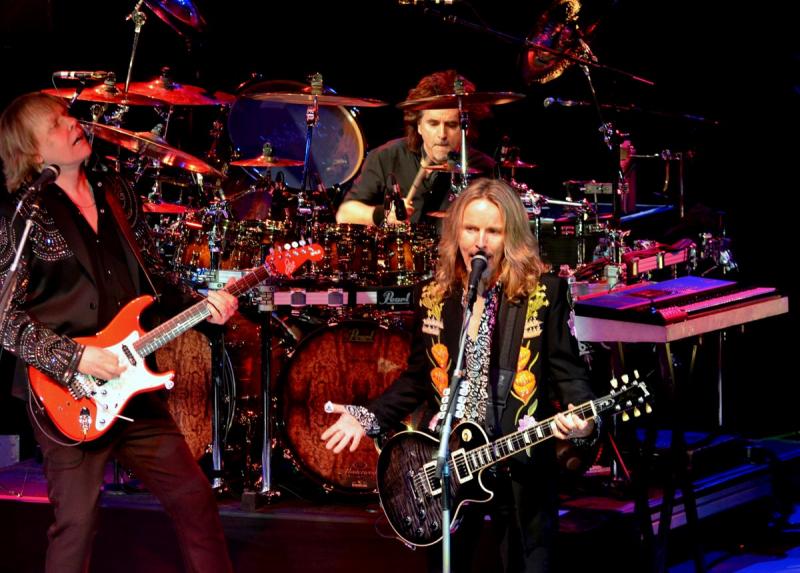 Styx is a rock band from America's heartland (Chicago) whose music blends the best part of rock, power pop, prog-rock, art-rock, arena rock with a touch of classical composition. The band originally consisted of brothers Chuck (bass) and John Panozzo (drums), Dennis DeYoung (vocals, keyboards), guitarists/vocalists, James "JY" Young and John Curulewski. Following Curulewski's departure and the arrival of guitarist Tommy Shaw, the band achieved its greatest success in the late '70s and early '80s. By the mid '80s, both Shaw and DeYoung had left the band for solo careers only to return (De Young first in 1989, followed by Shaw in 1995. Styx toured in 1996 with Todd Sucherman behind the skins as John Panozzo's declining health made it impossible for him to participate (he passed away in July of that year). Though the band soldiered on, DeYoung was forced to take a break after developing a viral ailment that made him sensitive to light. He was replaced by Lawrence Gowan. In late 2001, Chuck Panozzo confirmed rumors that he had contracted AIDS (but was battling the virus successfully). Glen Burtnik, who played guitar in the group while Shaw was on hiatus returned to the handling Chuck Panozzo's bass duties. In September 2003, Burtnik left Styx and was replaced by Ricky Phillips. During the past few years, Styx toured with a lineup featuring Shaw, Young, Gowan, Sucherman and Phillips with Chuck Panozzo playing bass on a number of songs at many of the band's performances.

On the opening night of Styx' two night stand at the NYCB Theatre at Westbury, the Long Island faithful gathered in the small venue's parking lot to tailgate, commiserate and enjoy what turned out to be the some of the last fairly warm days of the fall. Those who arrived early took up residence on the fringes of the grounds, fired up the barbeque, opened the coolers and blasted the band's CDs all in preparation for the evening's festivities.

The members of Styx took to the small stage that was initially bathed in a pink light. Drummer Sucherman bounded out and up on his riser situated at the back of the stage. After he took his place behind his set, guitarists Shaw and Young along with bassist Phillips strapped on their instruments and took their places. Keyboardist Gowan was the last to appear. He took his position on stage right and as the white overhead lasers blasted on and off, the overhead lights changed, bathing the stage in shades of blue. And the band got right down to it.

The band's set, featured hit after hit and was nothing short of astonishing. It opened with Gowen handling the lead vocals on "The Grand Illusion." The song with its pomp and circumstance arrangement immediately got the crowd on its feet. "Too Much Time On My Hands" (with its breakneck coda), during which James Young, Tommy Shaw and Ricky Phillips dance and juked together, followed. The audience ate it up as they sand along on both the verses and chorus.

Shaw took a moment to address the crowd. He said, "You sound like we're in a football stadium. Shit! We're gonna have ourselves a rock show tonight!" Now that is either an ambitious statement or a prophetic one. On this evening, in the case of Styx—it was quite prophetic!

Shaw then switched from electric to acoustic guitar for "Fooling Yourself (The Angry Young Man)" during which Young played both keyboards and guitar while Gowan played his silver revolving keyboard rig (with the bright light-up Styx logo on the front). It was during this song that while Gowan played the keys behind his back that Shaw and Young raced through the crowd making it a point to stop, play and "visit" with fans in each section of the intimate venue.

The ballad "Lady" was next, followed by "Light Up" (prior to which Young announced that it was his birthday and all that he really wanted was a cake and a beautiful blonde to bring it to him—low and behold that's exactly what happened. The band then played "Happy Birthday" while the audience sang along.) Once the birthday festivities had ended, the band began to play "Light Up" and the audience members raised their open cellphone and smartphones (many of which featured a lighter app) causing the seating area to brighten awash in light.

Young addressed the crowd again stating that "a few years ago we did a short tour where we played whole album sides in sequence. We played the full The Grand Illusion (A&M Records, 1977) and Pieces of Eight (A&M Records, 1978) albums. We discovered some songs. It's like when you find a piece of furniture in your house that you forgot you had. It's like shopping for free. This is one we discovered and its stuck with us ever since. This is 'Man In The Wilderness.'" The band then played an impassioned version of the Shaw-penned tune. a balls-to-the -wall rockin' version of "Miss America" from side two of The Grand Illusion, with Young on vocals, followed. This caused Shaw to remark, "Wow! It's hard to follow that with an acoustic number..." But he did. And, the audience was mesmerized by his beautiful take on "Crystal Ball."

After a superb version of "Lights," Shaw and Young announced, "That was nice. That's good because the nice part of our show is done. You can take it if we crank it up? Can't you? Good! "Cause we are blue collar men!

What followed was an electrifying version of "Blue Collar Man (Long Nights)." Gowen then took command of the show. Alone at the piano, he provided the audience with a treat. He performed snippets of some of the most beloved songs of the rock era, interspersing humorous anecdotes and piecing them together to form a solo medley that consisting of Billy Joel's "Piano Man," Elton John's "Benny & The Jets," the Eurythmics' "Sweet Dreams (Are Made OF This)," a sing-a-long version of the Rolling Stones' "You Can't Always Get What You Want," Jerry Lee Lewis' "Great Balls OF Fire" and Queen's "Bohemian Rhapsody" which morphed into a very short "Mr. Roboto" that served as a nice way to tie it all together while providing a nice opening for "Come Sail Away." Gowan then got the audience involved egging them on to sin with him. He plucked the plaintive opening notes and as the rest of the band returned to the stage and the group delivered a bombastic, electrifying, rockin' version of the song. Gowan, who is every bit the consummate showman, was a whirling dervish of energy, vitality, exuberance and emotion as he danced, pranced and stalked his way across and around the stage while singing and often stopping to tickle the keys on his customized spinning keyboard rig. He was a show within the show. He ended the performance of the main set away from his instrument singing to the audience from the edge of the stage as the song ended with an extended coda. The band then exited the stage.

After a short break, Styx returned to a thunderous ovation. Prior to the encores Shaw stepped up to the microphone and said, "Oh, Westbury, you are awesome tonight. You're so great let's do it again tomorrow night! You've turned this place into Paradise Theatre." The show performance ended with "Rockin' the Paradise" featuring Gowan (now wearing a fedora providing an amazing lead vocal and running into the crowd). The finale was, as it almost always is, "Renegade." The performance of the song was high energy, raucous and engaging. The lights came up and the five members of Styx stood at the end of curved stage took their final bows, shook a few hands and departed.

Styx released its first album in 1972. Even though more than forty years have passed, the band's performance on this evening brought the past into the present and judging by the applause, whistles and chants of the audience, there is no doubt that it is exactly what the fans want.