Styx at the NYCB Theatre At Westbury 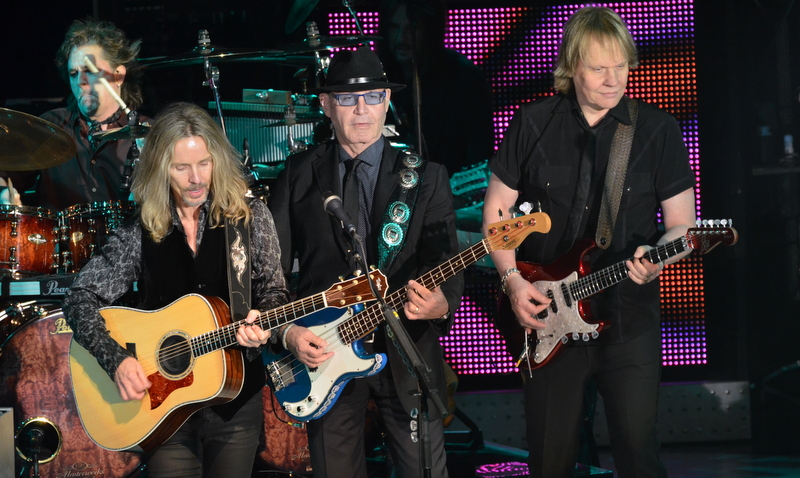 
Styx was formed in Chicago in the early '70s. Originally comprised of the Panozzo brothers (Chuck on bass and John on drums), Dennis DeYoung (keyboards), James "JY" Young (guitar) and John Curulewski (guitar), the band brought on guitarist Tommy Shaw (as Curulewski's replacement) in 1976. Shaw departed the band for a solo career at the conclusion of the Kilroy Was Here (A&M Records, 1983) tour. He returned in 1995, but John Panozzo passed away from a gastrointestinal hemorrhage in 1996. Chuck Panozzo left the band shortly thereafter, though he has since rejoined the band part-time and tours with Styx on a regular basis. DeYoung left the fold in 1999 and has not returned. Since its self-titled 1972 debut album (Wooden Nickel Records), Styx has sold millions of records worldwide while melding the elements of prog-rock with scorching hard rock guitar, pop sensibilities and flawless songwriting.

On the first night of a two night stint at Long Island's sold-out NYCB Theatre At Westbury, the current version of Styx (Shaw on guitar and vocals, Young on lead guitar and vocals, bassist Ricky Phillips, drummer Todd Sucherman and Lawrence Gowan keyboards and vocals) stormed the stage, launched into "Blue Collar Man" and proceeded to sonically blast the intimate venue into a state of frenzy. Quickly following with "The Grand Illusion" (featuring Gowan on lead vocals while playing his silver stand-and-spin keyboard rig with the light-up Styx logo on the front), the audience of mostly mid-forties revelers clapped, sang along, shook, shimmied and danced in the aisles.

Next, Shaw and his acoustic guitar came front and center, and asked the crowd to welcome founding member and original bassist Panozzo to the stage. Panozzo and the band further whipped the already delirious audience into an even bigger frenzy (of whistles, shrieks, catcalls and applause by delivering a note-for-note flawless rendition of "Fooling Yourself (The Angry Young Man)." Now it was Gowan's turn to really shine. Gowan, who replaced Dennis DeYoung, is definitely a showman. When he sang the ballad, "Lady," one could hear a pin drop and all eyes in the theatre were trained on him. He commanded the stage.

It was now that Young, with a sly smile on his face, stepped to the forefront and announced, "Ladies and gentlemen, Laurence Gowan with one from the Ford presidency, right after the Lincoln assassination. The next song hasn't been done on Long Island since the '70s... I see the cell phone light out there, so light up everybody!" The ensuing version of "Light Up" (the opening track on the Equinox album (A&M Records, 1975) proved that the underrated album track should have been a single. The also underrated "Man In The Wilderness" followed. Shaw told a wonderful story about the age of vinyl when the band would take the songs that had been recorded for its next record and try to sequence them together so that each side would build but more importantly start on a high note. "Man In The Wilderness" he said was one such song—the first song on side two of The Grand Illusion (A&M Records, 1977).

Young now took the lead vocal duties on "Miss America." Gowan followed with "I'm Okay," which he introduced with a funny story about life on the road and spending time in self-help sections of book stores and at vitamin stores. The set progressed with stellar versions of "Crystal Ball," "Pieces Of Eight" and "Too Much Time On My Hands" (after which Gowan announced, Oh Westbury, you are ALIVE!"). Gowan then sat at his piano and played an audience sing-a-long call-and-response medley of David Bowie's "Changes," Elton John's "Tiny Dancer," the Rolling Stones "You Can't Always Get What You Want," The Doors' "Light My Fire," Pink Floyd's "Another Brick In the Wall," Led Zeppelin's "Immigrant Song" and Queen's "Fat Bottom Girls." At the end of the medley Gowan repeatedly shouted, "I said hey!" to which the audience responded in kind. Pausing for a second, Gowan turned, smiled out on the crowd and deadpanned, "See, now you've fallen in love with yourself." When the audience stopped laughing and cheering, Chuck Panozzo, bass strapped over his shoulder again appeared on stage and the band played an incendiary version of "Come Sail Away." The song ended, the group took its bows, waved and headed off stage.

A few short minutes after they had left the stage, all six band members returned. Shaw introduced the band and it performed a spirited encore of "Paradise Theater" and an astounding and rocking version the Shaw-penned, bass-heavy "Renegade." The tale of the captured and condemned outlaw was a high energy, foot stomping end to an amazing concert.