It's about creating your own thing, making something fresher than what else is out there. And getting it out for other people to see. 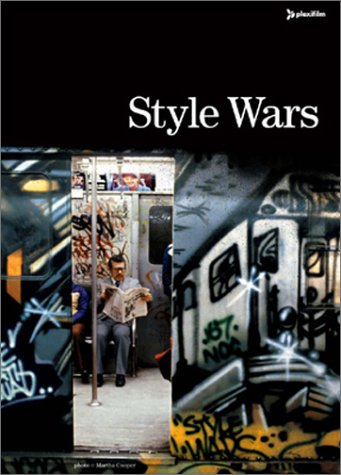 So says Skeme, one of the main characters of Style Wars, the landmark 1983 documentary chronicling the throes of New York's subway graffiti era. "Bombing," for those not in the know, is painting a train. "Writer" is a term serious graffiti devotees apply to themselves. And when they talk about their work, they use the term "piece," as in objet d'art.

That, of course, is the central dilemma of the movie, though it resolves rather efficiently. Is graffiti art or anti-social behavior? We're not talking about nasty vandals or quickie tags here, but what happens when a crew gets together with 30 cans of paint and a plan to do a whole car in vibrant multicolor. The answer is abundantly obvious based on the evidence alone, but producers Tony Silver and Henry Chalfant pound it home most emphatically. Art is art for art's sake. And that's exactly what motivated the kids in NYC during the period around 1980. Flash a quick ironic script hastily written on a train door: "FROM HERE TO FAME."

It's a matter of... knowing I can do it. It's for me... I don't care about nobody else seeing it. It's for me and other graffiti writers that we can read it.

The thing that makes Style Wars so special is the brilliant way it illuminates graffiti culture, normally hidden in the depths of night while it imagines and creates images for the day. Co-producer Henry Chalfant took pictures of trains in NYC for three years before he met the artists; and when he finally went to the infamous "writers' bench" (central gathering place and idea exchange), it took months for the kids to accept that he wasn't a cop. But what a reward: vivid pictures of these artists' raw material, their ideas, and their motivation. All captured on film. The B&W color in this setting lends an entirely appropriate underground air to the operation.

Scenes between the teenage writer known as Skeme and his mother periodically appear throughout the movie. He's devoted beyond comprehension; she's completely (and realistically) mortified. But what can you do? He's an artist. The message: these writers had mothers, too.

Extended footage documents the transformation of a blank brick wall into a sparkly, bright mural with the headline "United Artists" and the frontline "Seen." The writer known as Seen directs this production, coordinating his crew and making sure the ideas in his head come out right on stone. There's an appropriate degree of flexibility and tolerance involved, too, since this is clearly a group event.

First comes the outline. Then the fill-in, which covers it up. The colors, chosen carefully. The background, and whatever details fill in the space around the main figure, and then it's basically done. It's very serious stuff. A certain amount of banter from the artists at work helps viewers understand what's going on in their heads and in their hands.

At the end, the transformation is complete. Just like a subway train, which would be illegal to paint and thus incriminating to film, but done in sunlight with ladders and plenty of time to get it right. For the most part, passersby marvel and delight in the piece that results.

The enormity of the event does not go unnoticed. As Dondi remarks later in the movie, bombing can be a daunting task:

Bonus points for getting it right, and major status points for having your own style. The title of the movie gets at the heart of this culture. It's not about following other people's ideas—though every participant in the film expresses respect for the long lineage of graffiti writers beginning with Taki 183 (from 183rd Street in Washington Heights) around 1970. It's about creating your own thing, making something fresher than what else is out there. And getting it out for other people to see.

From the moment the film's title drifts across the screen like it was painted on a train, you know you will be seeing a lot of locomotion in this film. A whole lot of cars. Some images are organized around themes (for example, Seen's myriad creations, with a rainbow of colors, endlessly varying letters, and idiosyncratic cartoons). Others just pop in and out. The great white Merry Christmas train, for example, with straightforward calligraphy script right down the center of the car carrying a perky holiday message. And they say commuters didn't like this stuff?

Of course they didn't. They got to see the vandalism and crude tagging inside the trains, relentlessly scratched onto every corner of the car. They were very upset. They insisted that Mayor Ed Koch solve the problem, and so he becomes a main character in the film. What a serious dork. Honestly. (The filmmakers are not exactly unbiased here, so their opinions color the whole affair.)

Koch says these writers are "all in the same area of destroying our lifestyle and making it difficult to enjoy life." Ahem. He carefully juxtaposes murder and graffiti when discussing capital punishment. He blunders hopelessly and backwardly when introducing the ad motto "Make Your Mark In Society. Not On Society." Says Koch, "I'm hopeful that it will, uh, work." Just to emphasize the seriousness with which he views the issue, he makes an astounding parallel to another great achievement during his tenure:

Nobody thought we would be as successful as we were in the campaign against the drought and water conservation. Nevertheless, that worked.

Enough of that. Another insidious evil appears in the form of Cap, whose specialty is painting his crude sign on every train and stamping out any other piece that might have found itself a comfortable home: "I am not a graffiti writer, I am a graffiti follower. Blood war, buddy!" Even though Cap manages to defecate on most of the community's creative artists, they lack the will or the courage to organize against his blatantly militarist stand. An interesting twist in the story, for sure. Regardless, the theme of confrontation emerges at many levels: between writers and the city, between writers and their enemies, and among the community of writers themselves.

Style Wars touches on so-called "graffiti art" (the high-brow version), which borders on total crap despite its moments of brilliance. Some "retired" bombers turned to canvas and sculpture to continue their ideas, and the results are interesting but mostly void of the intensity and energy found in the train pieces. Since bombing more or less died out, it's left its mark but it's never been the same.

Related elements of the NYC underground around this time are interwoven tightly into the story. Break dancing, for example, plays a major role. So does early rap. The four pillars of this culture all come together at various points: graffiti, B-boys, rap, and hip-hop. While graffiti remains at the center of the story, the aptly named Crazy Legs gets his due amount of footage for superhuman moves on the floor. When the Dynamic Rockers meet the Rock Steady Crew, Crazy Legs (and Li'l Crazy Legs) take center stage and the crowd goes wild.

In one of the outtakes, Dondi shows off his graffiti-inspired canvases, way down in a very un-studio-like basement. They fall short in majesty but make up for it in inspiration. He talks about the importance of symbols and shares some of Rammellzee's thoughts about how "the only way to destroy a symbol is with a symbol." He demonstrates a painting that he originally made in 1980 with the words "I Love New York," now completely covered up with another, based around the simple letter "B." Says Dondi, "I like it much better now." RIP.

Not to wax overly nostalgic about the era, but graffiti (and its highest art in the form of subway bombing) bears incredible relevance to art's role in society. Cultural confrontations like this persist to the day, despite the ever-intrusive tentacles of mass-produced media. Nobody knew in the early '80s that their era would give rise to a new form of music that would dominate the industry for decades. Hip-hop and rap are just two obvious examples of how the underground broke ground and soared into capitalist heaven. It's too bad NYC decided to paint its bombers into oblivion (quite literally), because in the process their nucleus simply imploded.

The movie itself is impressive at every level. The raw footage of painted trains is breathtaking in its intensity and diversity; and the connections between personality, motivation, and talent appear constantly in unexpected ways. The social context of the subculture gets its due, both on sympathetic and confrontational fronts.

Unlike many DVD releases these days with bonus material, this one has some wonderful stuff to offer—nearly endless train footage (200 cars!); interviews with producers, editors, and artists; images and music. That second disc is a gold mine. (Compare the 70 minute of actual movie time with the 3.5 hours of bonus footage and you get the general idea.)

When Style Wars came out in 1983, it caused a major stir. For a film funded by the Corporation for Public Broadcasting, the National Endowment for the Arts, the New York Council for the Humanities, and many others, it took a very subversive stance. In the end, the filmmakers got their point across: art is culture. And—sometimes—culture is art.

Visit Plexifilm on the web. The Style Wars page offers an impressive variety of images, text, and videos, plus a heap o' links.