Stunt Records in the Spotlight: Enrico Pieranunzi and Sinne Eeg

By JAKOB BAEKGAARD
October 21, 2017
Sign in to view read count
For a long time, Stunt Records has released high quality music from the Danish jazz scene, some albums have gone on to become classics while others have just pleased those in the know. In terms of genres, Stunt is a curious label with an ear for many genres, including avant-garde, world music, funk and fusion, but the identity of the label lies in releasing mainstream modern jazz that has a potential to reach many listeners. This is certainly the case with two of the most recent releases from the label: a historical live album from Italian pianist Enrico Pieranunzi's Danish trio and a vocal album from Danish sensation, Sinne Eeg. 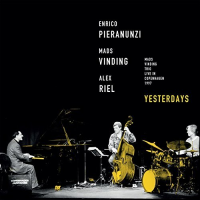 Stunt's catalog includes some of the finest names in jazz. One of them, the Italian pianist Enrico Pieranunzi, is a crucial part of what has become a genuine classic in Danish jazz: the studio album The Kingdom -Where Nobody Dies (Stunt Records, 1997) with the Danish master musicians, bassist Mads Vinding, and drummer Alex Riel. For a long time, it seemed impossible that new music would emerge from this trio, but out of nowhere comes a wonderful live recording from the trio, recorded the same year the album was released.

The liner notes don't mention any reason for the late arrival of the album, but now it is here and it is possible to witness the special chemistry between the three musicians. As ever, Pieranunzi is a true virtuoso. His dazzling runs on the piano on the opener, a reading of Jerome Kern's "Yesterday," is almost too much, but fortunately Pieranunzi also slows down. It is the never settled tension between the lightning fast lines, the sharp diamonds of musical thought, and the contemplative beauty of a soft melancholy touch that form the core of Pieranunzi's artistry. This aesthetic tension is evident on the reading of the standard "My Funny Valentine," which is both tender and hectic.

Playing with Pieranunzi requires the ability to turn on a dime and Vinding and Riel are able to follow his every move with fluent and deep musicality. Pieranunzi has a certain fondness for Danish bassists, a recording with another master, Thomas Fonnesbæk, is in the works, and it is understandable why when Mads Vinding's elastic grooves and sure sense of poetic pulse sail away with the music. Clearly, the musicians had a good time, and now a wider audience has the possibility of revisiting a wonderful night. 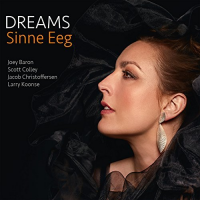 It has been a while since Danish singer, Sinne Eeg, joined Stunt Records' roster of artists with the album Face the Music (2014), but in a way, her latest album is a new beginning. All sails have been set to make Dreams (2017) the international breakthrough that the singer deserves. In fact, Eeg has already achieved quite a lot, winning prizes and toured internationally, but this album, a partnership between ArtistShare and Stunt Records, signals a rise in ambition.

First of all, esteemed jazz writer Neil Tesser has been brought in to write the liner notes and in keeping with the genre, he does not hold back the praise, calling her "the real deal" as he notices her: "emerald tones both light and dark, sometimes throaty or bitingly clear." Tesser touches upon Eeg's biography and mentions her inspiration from church, her fascination with the Great American Songbook, her ability to write her own material and, not least, her pure musicality that comes through in a voice that is like an instrument.

Her voice is allowed to shine in a band that includes her regular musical companion, pianist, Jacob Christoffersen, and an A-list band featuring the drum-whisperer Joey Baron, Larry Koonse's crisp guitar and not least the superb backing of bassist Scott Colley. Together they explore a repertoire that covers Eeg's self-penned songs, including the political ballad "Aleppo," dedicated to the children of Syria, and the ethereal word-less title track where Eeg sings lines in tandem with Koonse. She also shows her knack for writing a good ballad. "Time to Go" has something of the quality of "Waiting for Dawn," a jewel in Eeg's own catalog.

There is also room for tried and true standards like "Anything Goes," "I'll Remember April," "Falling in Love with Love" and "What Is This Thing Called Love," which Eeg tackles with effortless musicality and class, and class is exactly the keyword that describes this album. It shows that Eeg is not only one of Denmark's finest jazz singers, but also a voice that should be able to court an international audience.

Tracks: Yesterdays; Vignette; Jitterbug Waltz; A Nameless Date; My Funny Valentine; My Foolish Heart; If There Is Someone Lovelier Than You.