By DEREK TAYLOR
February 4, 2006
Sign in to view read count 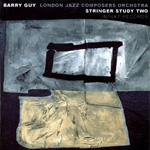 The London Jazz Composers Orchestra remains on indefinite hiatus, victim of the twin torpedoes of finances and logistics. Founder and leader Barry Guy filled the breach with a streamlined version dubbed the New Orchestra. But even blessed with the broad merits of the reconfigured band, it's hard not to feel pangs of nostalgia for its more populous precursor. New LJCO recordings may not be forthcoming, but this recent Intakt reissue provides two ambitious and distinct archival pieces by two different incarnations of the group.

Originally released on LP by FMP in 1980, the sectional "Stringer makes use of what many would consider a dream roster. The reed section alone, with Watts, Parker, Brötzmann and Coe, contains enough firepower to level marble prosceniums, not to mention the bass and percussion tandems of Guy/Kowald and Oxley/Stevens. Regrettably, the BBC recording isn't the best at capturing the band in a good audio balance. The "rhythm section in particularly sounds somewhat distanced in the mix.

But the fidelity issues are truly a minor problem. Guy makes clever use of a myriad of combinations throughout the piece's four parts. In the notes he describes tensions that arose from his detailed scores, several of the musicians bucking at the structured bit imposed by his charts. Those interpersonal tensions are hardly evident in the sounds and improvisation guides the action as much as the skeletal body of Guy's composerly influence.

Detailed booklet annotations allow easy identification of who's doing what and when, but the piece feels almost too crammed with activity, particularly in the second two parts where baton tradeoffs occur in swift succession. Among the standout passages are Wachsmann's electronics-laced arco work in heated conversation with Oxley on the opening and close of "Part I and a striking relay of reeds on the opening half of "Part III.

I found myself wishing repeatedly that these passages and others had even more temporal girth to expand and develop. Miraculously, at forty-odd minutes long the piece feels short and some of the sub-groups (Parker teamed with Guy, Kowald and Stevens, for one) all but beg for greater spotlight space.

"Study II dates from nearly eleven years later and benefits significantly from the expert engineering of Peter Pfister (a shame he wasn't on hand for the BBC date). Structurally, it's quite different from its predecessor. The band builds opening and closing passages that dramatically subsume individual voices. The controlled drone-like effects are both calming and starkly at odds with what you might expect from a band populated by celebrated free jazz blast furnaces like Parker and Dunmall.

As if like clockwork, cracks in the ice soon occur and the band erupts into a series of molten solos and ensembles, before freezing over once again for the finale. The contrast of order and finesse with tumult and temerity, austere cold with raging heat, makes for a very rousing listening experience. With luck, Intakt has more waiting in the vaults and plans to release it sooner rather than later.