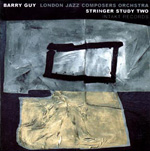 This newly-released outing looms as a modern/free jazz fest, highlighting studio sessions performed in 1983 ("Stringer, London) and 1991 ("Study II," Switzerland) and led by bassist Barry Guy's multinational orchestra, featuring a who's who of the Euro jazz and improvisation scene. The bassist steers the ensemble through a potpourri of mood-evoking frameworks. In addition to spiraling soprano sax solos by Evan Parker and yearning lines by trumpeter Kenny Wheeler, Guy's compositions boast ominous strings and horns passages instilled with climactic movements and more.

Within the foundations of these two performances, segmented into multi-part iterations, the large ensemble bridges frenetic impetuses with layered and largely cascading movements. Fiery soloing endeavors by saxophonist Peter Brötzmann and many other luminaries intimate the band's unfathomable depth. Many of the musicians' vociferous discourses translate into deconstructions of previously avowed motifs. In certain spots, the music looms as a constant renewal process. But there are sonorous parts, dabbled with minimalist musical gestures. In the liners, Guy describes the recording techniques used for both sessions.

These works include a multitude of musical forms; avant classical practices are interspersed with boisterous improvisational exercises and garrulous third-stream passages. And a sense of drama is exploited through the artists' individual reckonings of Guy's sound-sculpting methods and loosely based intentions. These compositions radiate a new approach which defies the norm, while providing the listener with a feast for the heart and soul.

Visit Barry Guy on the web.