By JEROME WILSON
November 18, 2016
Sign in to view read count 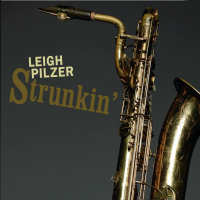 Leigh Pilzer is a baritone saxophonist from the Washington, DC area who has made a busy career for herself teaching, playing in various small groups and holding down the baritone chair in the The Smithsonian Jazz Masterworks Orchestra, the DIVA Jazz Orchestra and the Bohemian Caverns Jazz Orchestra. On this, her first CD as a leader, she fronts a small group made up of her bandmates from all three of those ensembles.

This is a live recording of Pilzer's set from the Washington Women In Jazz Festival held in March 2016. It demonstrates the way Pilzer wields her instrument in a warm, enveloping manner that sounds good at any tempo. She sounds as romantic as Harry Carney on the ballad "Miss Ally In Allyworld" and rolls along roguishly like Gerry Mulligan on the mid-tempo stroll of "Strunkin.'"

The entire quintet has an easygoing but solid cohesion and impish style and all get to shine on a program of originals written by Pilzer and other band members. "Blue Moo" is a pretty, stylish waltz notable for the brassy exuberance of Jen Krupa's trombone and the elegant two-handed swirl of Jackie Warren's piano while "Brag Time," written by bassist Amy Shook, is a funky stomp, dedicated to Sarah Vaughan, where Warren slides into gospel soul territory and Krupa breaks out some low down plunger mute sounds. "Thaddish" is a more upscale piece of jazzy blues-soul marked by exuberant baritone playing and Sherrie Maricle's deft and swinging brushwork.

There's also swinging Latin romance on "It's Anyone But You," brawny funk on "Look Before You Lerp" and a final playful snatch of bebop on Krupa's variation on Charlie Parker's "Donna Lee," "Duel At Dawn." All of these spotlight the friendly interplay between Pilzer and Krupa as they work in and out of each other's phrases and trade high-spirited solos.

This CD shows off not only Leigh Pilzer's talents as a musician and writer but the talent of everyone in her band. This makes a fine calling card for musicians who deserve to be better known.

Strunkin'; Blue Moo; Miss Ally in Allyworld; Brag Time (Shook); Thaddish; It's Anyone But You; Look Before You Lerp; Duel at Dawn (Krupa)