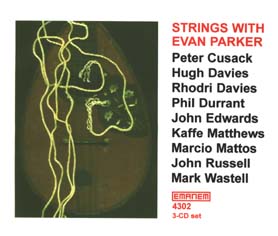 Free improvisation works best in trios, quartets and quintets, where the music resembles a discussion or debate, with each player responding to the contributions of all the others. In larger groupings, it becomes increasingly impossible for each participant to listen and respond to everyone else. A "cocktail party effect" takes over, as each player only responds to some of the others, and several parallel conversations happen. Although these may be individually valid, the total effect for the listener can become cacophonous. For this reason, ensembles that contain a larger number of players (Derek Bailey's Company, and the 2:13 Club's annual Relay spring to mind) often employ devices so that only three or four play together at any one time.

This sprawling, ambitious 3-CD set is another fine example. With ten players available, there is potential for overcrowded, cluttered soundscapes but this is deftly avoided in several ways. Firstly, the heart of the album consists of ten pieces by a series of sub-groups. For these, each string player picked three or four players to join them in a quartet or quintet. The results are exactly the sort of music that keeps free improvisation addicts hooked—varied, dynamic, unpredictable, gripping.

Secondly, even on pieces where all nine of the string players are in action, there is a feeling of common purpose and rarely a hint of clutter. The music created has a greater sense of unity than would be the case with nine diverse instruments. As if to emphasise this, Evan Parker only plays on six of the twenty-two tracks. So the album title, while being a knowing inversion of Charlie Parker with Strings, is also factually correct—the main focus is on the strings, not on Parker.

Unsurprisingly, when he does play, Parker completely dominates proceedings, as illustrated by the tracks "Single Headed Serpent" and "Double Headed Serpent." The former features all nine of the string players and is a highly focussed piece that slowly evolves with no dramatic shifts of mood. The latter is the same track with Parker overdubbed. Playing with characteristic energy, and employing all his trademarks, he reduces the strings to a subordinate role, as one focuses on the sax rather than the subtle shifts in the strings. The two tracks together (nearly an hour of music) invoke a Rashomon-style re-evaluation of what one has heard.

The success of this session is emphasised by the closing track, "Flying Spark." The least successful track here, it dates from an earlier session at which Parker gathered 23 musicians together to record some large and medium scale improvisations. Seemingly, that session failed to gel, as these five minutes are all that have been released from it. Its relative failure serves to illustrate the unpredictability of this music.

About Strings with Evan Parker