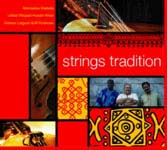 Binding the ancient but still thriving string tradition of the kora (a 21-string West African harp), the Northern Indian Hindustani tradition of the sitar and the Southern Indian Carnatic tradition of the violin is really a brilliant idea. the debut release of Strings Tradition brings together five versatile and resourceful musicians who, rather than just finding a common musical language, possess a true timbral affinity and intimacy.

New-York-based Malian kora master Mamadou Diabate comes from a griot's family. His father, Djelimory Diabate, played the kora and he is related to another great kora player, Toumani Diabate. He has collaborated with diverse musicians including jazz bassist Ben Allison, blues guitarist Eric Bibb, Beninese singer Angelique Kidjo and Irish folk singer Susan McKewon. Sitarist Shujaat Husain Khan, son and a pupil of one of the greatest sitarist ever, Ustad Vilayat Khan, is a specialist of the singing style of the sitar, gayaki ang, and a close collaborator with Persian kamancheh master Kayhan Kalhor. The inventive Southern India violinist Lalgudi G.J.R. Krishnan also comes from a musical family, his father, Lalgudi G Jayaraman, also a renowned violinist. Tablaist Gourishankar and ghatam player Muraly Trichy round out the quintet.

Diabate's "Nyanafi" ("I miss you" in Manding language) opens Strings Tradition, and from the first seconds its organic flow and the ease of the gentle interplay between the kora, sitar and violin are palpable as they explore and articulate beautifully on the romantic theme. Diabate states a simple circular line on the kora, Khan extends and expands it soulfully on the sitar and Krishnan adds the right dose of pathos to the recurrent theme. Krishnan 's "Birds First Flight" transforms the classical Indian form of jugalbandhi—a playful competition that often ensues between the soloists at the ecstatic climax of the raga—for some high-voltage and amazing improvisations by Diabate, Khan and Krishnan, as they exchange joyfully rapid cadenzas.

Khan's "Himalayan Rain" leads the ensemble into much more meditative and introspective terrain. The composition is based on the popular folk song, "Tere bina saajana, jaan me jaan aye na" (without you my love, my heart is not a complete...), used on countless Bollywood films. Khan gently recites the romantic lyrics while the ensemble patiently explores this touching melody. Diabate's kora sound so natural and obvious, as he articulates the theme, that it's easy to confuse the origin of this song to the West African Mandinka. Gourishankar and Trichy get the chance for a virtuosic and nuanced percussion duet before the ensemble returns to explore the theme. Diabate's short and optimistic "Sigui Dyarra" concludes a unique collaboration that transcends boundaries, language and cultures, and demonstrate that music can suggest an intimate and trustworthy means for human interaction.