By JAMES PEARSE
November 7, 2012
Sign in to view read count 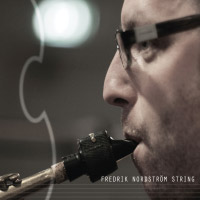 As well as writing and arranging albums under his own name, Nordstrom is an experienced co-leader and sideman, which is reflected in his confident and thoughtful playing style. He has performed extensively in his native Sweden and across Europe with world-class musicians like pianist Bobo Stenson, bassist Palle Danielsson, violinist Mat Maneri, trumpeter Tim Hagans and drummer Gerald Cleaver.

Recorded entirely at the famous Atlantis Grammofon studios in Stockholm, String is a complex recording and is also the first time tenor player Nordström has recorded a whole album solely on alto saxophone.

Compositions such as "What Now?," "Toy Music" and "Doghouse" are caged animals, which are seemingly not to be confined to such things as harmony and structure. Once unleashed, usually around the halfway mark, they seem to generate an unusual, often discordant character that offsets dark noises with timeless melodies and reassuring string parts. In contrast, "Enekullen" opens with the delicate picking of strings and a subtle, somewhat nostalgic alto lead from Nordström. As the saxophone gains pace, the other instruments swell behind him to create a surprisingly melodic experience that smacks of childhood, home and belonging.

While Nordstrom is clearly the leader here and his voice dominates all ten songs on String, several of the songs create electrifying encounters between the instruments on lively free numbers as well as lyrical ballads.

While it is hardly a new idea to bring strings into the jazz setting, the two trios complement each other expertly. The smoother, more pensive strings counter the jazz trio's hunger for new territories and sounds and while String is never easy listening, it is a rich and ultimately rewarding exploration.