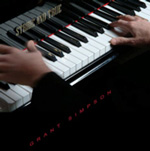 Grant Simpson hits the piano cleanly, and he sounds like he hits it hard. He mentions the "ever-present dry wit" of Dick Wellstood when introducing a performance of Wellstood's "Dollar Dance," whose composer called it "a distant relative" of Jelly Roll Morton's "Perfect Rag."

Though it's necessary to mention Wellstood's likely influence on Simpson's slowish tempo through much of the opener, James P. Johnson's "One Hour"—and Simpson's central commitment to Harlem stride piano—he emulates Morton by making a priority of rhythmic precision, and is a very different player from Wellstood. Though he apologises to Mortonians for the not strictly Jelly Roll style on "The Pearls," the clean striking of accents is more Mortonian than most: no piano-teacher's mechanically tasteful gradation of touch. A distinctive independent!

While the reading of "On the Street Where You Live" is well-acknowledged as following the majestic Dave McKenna's precedent, Simpson uses gradations in his very powerful left hand, rather than McKenna's draggings, slurs and grumbles. It would have been nice to hear the tragically now-disabled McKenna play Simpson's ballad "So Beautiful Like You." McKenna did record "Just as Though You Were Here," which is where Simpson heard it and why it's here, so McKenna is not entirely absent.

Other Simpson compositions include an initially ragtimey "Stridin' for HJ," which goes into single-note work over stride bass. "Load of 'Cole'," nothing to do with another tune of the same name, or with Nat, is a short exercise in striding a simple riff theme. "Love of My Life" is a Fats Wallerish tune, and like the first excursion into Waller compositions, "How Can You Face Me?" is delivered at medium tempo, happily upbeat.

By dint of Simpson's firm playing, the through-composed "Viper's Drag" comes out as the interaction of a definite stylist with a number not to be played note-perfect, but interpreted. While James P. Johnson's "Just Before Daybreak" is less well suited to the Simpson treatment—the piece needs more relaxation—his tension does no harm to an "Echo of Spring," which comes out crystalline and with ingenious variations. Johnson's "Mule Walk" is retimed or rephrased; I didn't recognise the tune immediately, but I'm not complaining, because I relished the charged and bustling delivery.

"Whitehorse Blues," with rock-solid, deep walking bass, comes across without needless fancy business, reminiscent of a blues Harold Mabern recorded solo in Toronto some time back. Simpson's from Whitehorse, in the Yukon, which may or may not be a determinant of his distinctive approach to playing piano in his preferred genre of jazz piano. He's also the webmaster of a discussion group on stride piano.

If I Could Be With You One Hour; Dollar Dance; Load of Cole; You Can't Loose a Broken Heart; On the Street Where You Live; So Beautiful Like You; Stridin' for HJ; The Pearls; Just as Though You Were Here; How Can You Face Me?; Viper's Drag; Love of My Life; Just Before Daybreak; Echo of Spring; The Mule Walk; Whitehorse Blues.