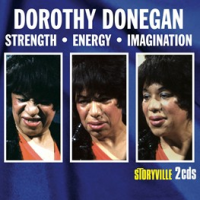 With this double album, Storyville Records—surely the greatest Danish invention since pastry—tells the story of a legend that never was.

Dorothy Donegan, born in Chicago in 1924, trained as a classical pianist before switching to jazz and being hailed as "the female Art Tatum."

She made her recording debut when she was 18 and three years later appeared in the movie "Sensations of 1945," sitting in with Cab Calloway's orchestra (see attached video). The following year, in July, she was featured on the cover of Ebony, Afro- American equivalent of Time magazine, and looked all set to become a household name.

Alas, she never did.

From 1954-63 she recorded seven moderately successful albums. Then she worked for 10 years at the Embers supper club in New York before dropping off the radar in the rock-dominated 1960s and early 70s. In 1974, she turned 50, relatively unknown.

Why, despite her manifest musical ability, did Dorothy Donegan fail? When asked the question, she always shrugged her shoulders and pointed out laconically that she was a woman... and black. Some critics said she played in too many different styles. Others accused her of throwing in gratuitous displays of technique in an age when less was starting to be more.

She was certainly her own worst enemy. Marian McPartland recalled Donegan's appearance on her Piano Jazz radio program in which she duets with guests. Usually, this is for fun but Donegan took it deadly seriously. "At the end I said to her 'Dorothy, it's O.K., you win.' She says: 'Oh, no contest.' And she meant it. She really thought that I was a weakling and that she was better than me in every way."

It was only in the mid-1970s, with gigs in Europe, that diva Donegan managed to curb her imperious nature and began to achieve recognition all over again. The second CD of this reissue is an album she made for the French label Mahogany in 1975. The opener, her own "I Just Want To Sing" is firmly anchored in the blues. She turns Stevie Wonder's "You Are The Sunshine Of My Life" into a joyous romp before returning to the 12-bar format on "Donegan's Blues," an exciting, extended exploration that manages to contain echoes of both Avery Parrish's "After Hours" and "Blue Monk."

By contrast, the traditional "Lift Every Voice And Sing" is kept short and to the point, with an interesting change in tempo to close. "Dorothy Runs Away," based on "Little Rock Getaway," goes at a tremendous lick, with Arvell Shaw permitted a bass solo. Donegan displays her command of the keyboard on "Willow Weep For Me" and a cheeky interpretation of Ludwig Van's "Minuet in G," which includes a spot of boogie-woogie and a quote from "I'm Just Wild About Harry." She parodies Erroll Garner on "If I Loved You" from "Carousel" before bringing things to a breathless conclusion with "Stop The World."

CD No 1, recorded in Copenhagen five years later, is another pianistic tour de force but suffers from too many medleys (four in all) and from La Donegan's occasional mediocre vocals which pay scant respect to the lyrics. On the plus side, there are fine instrumental (and in the main respectful) versions of "Take The A Train" and "Satin Doll."

Like Marian McPartland, the listener is left wiped out by the dazzling display. They simply don't make 'em like Dorothy Donegan any more.

CD1: Rosetta; Medley – When I Fall In Love, The Way We Were; The Best Things In Life Are Free; Medley – Pennies From Heaven, You‘re Nobody Till Somebody Loves You; Medley – Out Of Nowhere, Sweet Lorraine, Send In The Clowns; Take The A Train; Medley – You Are So Beautiful, Edmund Thigpen’s Gospel; Satin Doll. CD2: I Just Want To Sing; You Are The Sunshine Of My Life; Donegan's Blues; Lift Every Voice And Sing; Dorothy Runs Away; Willow Weep For Me; Minuet In G; If I Loved You; Stop The World.