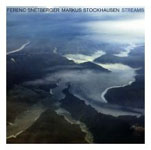 Hungarian born/German based guitarist Ferenc Snétberger and German trumpeter Markus Stockhausen have been making music together for many years, most recently on Joyosa (Enja, 2004), where they were joined by Norwegian bassist Arild Andersen and French percussionist Patrice Héral. Joyosa, a cooperative focusing on the writing of everyone involved, contrasts sharply with Karta (ECM, 2000) where the trio of Stockhausen, Andersen and Héral recruited electric guitarist Terje Rypdal instead of Snétberger and, with live electronics also a part of the picture, created a more expansive soundscape.

Karta was also a more decidedly improvised affair, its 65 minutes largely culled from a single ninety-minute improvisation that was then digitally edited and reduced into seven distinct pieces, each possessing a surprisingly composed feel. The all-acoustic Streams, featuring the duet of Snétberger and Stockhausen, is considerably more intimate than Karta, but with six of its ten tracks spontaneous compositions, bears more in common with it than with the all-composed Joyosa.

While the improvisations are of such an empathic nature that it's sometimes difficult to differentiate, based on the unison lines that bookend the nine-minute "Hangolas," it's also clear that at least some of these tracks are based on agreed upon initial premises. Still, once Stockhausen and Snétberger have established a mood with their introductory line, the track becomes freer, with the trumpeter layering spare melodies over Snétberger's detuning and retuning bottom string. Episodically, a cued unison passage resets the context for Snétberger's dark-hued a capella solo before the guitarist leads into a series of finger- picked, Ralph Towner-like changes that provide Stockhausen a more structured foundation on which to solo.

Snétberger's Towner reference has always been a defining quality, and with Stockhausen occasionally delivering the kind of stratospheric leaps that are a signature of Kenny Wheeler, parts of Streams suggest how a duet record between those two artists might well sound. Still, both Snétberger and Stockhausen are far more than mere imitators, with Stockhausen's "Rose" a lovely and more direct lyrical ballad with poignant solos from both, while Snétberger's "Toni's Zirkus," is a more driving piece featuring Stockhausen's muted horn.

Stockhausen keeps his unmistakable virtuosity in check throughout most of Streams, focusing more on melodic lines. Snétberger largely does the same, though what is clearly a classically-informed jazz-centricity frees him up to deliver solos that, at times, sound remarkably close to two guitarists. And though the duo emphasizes melody, the contexts can be abstruse, as on the ethereal tone poem, "Ear to Ear" and even more abstract "Xenos."

Stockhausen has never shied away from avant-garde leanings, specifically on his two ECM discs with Aparis, and the freely improvised Cosi Lontano...Quasi Dentro (ECM, 1989). On Streams, however, despite its many moods and tempos, is about finding melody in every possible nook and cranny and, as such, makes for a thoroughly engaging listen from start to finish.