By JOHN KELMAN
September 6, 2004
Sign in to view read count 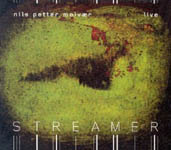 Trumpeter Nils Petter Molvaer, surely one of the founding fathers of the Norwegian nu jazz scene, continues to mine the depths of ambient texture with Streamer , a live album recorded in Norway and London in '02. Comprised mainly of material from NP3 (EmArcy, '02), with the exception of the title track from Solid Ether (ECM, '00), Molvaer demonstrates that music can be as much about the fabric of sound as it is more lyrical concerns.

That's not to say that Molvaer isn't a lyrical player. In fact, one of the things that has differentiated him from the rest of the electronica crowd is a strong predilection for melody. Even on more pulsing breakbeat tracks like "Frozen," Molvaer plays with a thematic sense, weaving ideas in and out of the spacious fabric created by his group. "Little Indian" has the closest thing to a song form, and "Kakonita" finds Molvaer, at least at the start, alone, naked and exposed. Guitarist Eivind Aarset joins in to make it a duet, with a warm and rich sound that is no surprise to fans of his own Electronique Noire albums.

If this is representative of the flow of a typical Molvaer performance, then it is clear that Molvaer has an uncanny sense of dynamics and pacing. Starting out with the more danceable rhythms of "Frozen" and "Marrow," the set breathes in the middle with the more ambient tracks "Little Indian," "Kakonita" and "Sauna," before gradually building the pace to the throbbing finale of "Solid Ether." Like Aarset's own work, Molvaer builds sets that are like travelogues, taking the listener on unexpected journeys that somehow capture the cool of Norway, while feeling at the same time warm and supple.

But in the final analysis it's all about sound and texture, tone and timbre. Other than Molvaer's lyrical statements, which only make up a small fraction of the whole performance, the emphasis is not on any kind of soloing in the traditional sense. Drum and bass lock into deep grooves while Molvaer and Aarset work at creating atmospheres that are strange yet somehow organic, with DJ Strangefruit layering added sonic threads.

With the plethora of electronica artists emerging in the past few years, it's interesting to note that the best work that is at its most pure seems to be coming out of Norway. Projects like keyboardist Bugge Wesseltoft's New Conceptions in Jazz and Eivind Aarset's aforementioned Electronique Noire seem to be forging a whole new direction in modern music that incorporates elements as diverse as Brian Eno and Bill Laswell. But at the heart of the movement is clearly Nils Petter Molvaer, who, with '97's landmark ECM release Khmer , created an entirely new aesthetic. Streamer continues to develop his conception, taking the constructs of the studio and placing them on the stages of clubs around the world.