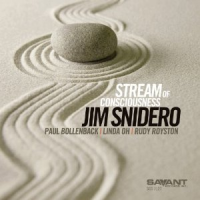 The jazz world would likely forgive saxophonist Jim Snidero if he fell prey to artistic stagnation every now and then, but he might not forgive himself. He's kept a steady flow of solo albums coming through the pipeline for a quarter century and, while other artists who are equally prolific find themselves falling back on tired formulas and the same old tunes to fill out their records, Snidero continues to surprise with each addition to his discography.

When Snidero arrived at the Savant label in 2007, he pulled the pianistic rug out from under himself, making Paul Bollenback his new go-to harmonic companion; he's been working different scenarios, with the guitarist by his side, ever since. Tippin' (2007) took Snidero back to organ territory, which he explored earlier on as a sideman with Jack McDuff; Crossfire (2009) found the saxophonist mixing it up on bop, ballad and bossa-based tunes, while Interface (2011) broadened the sax-guitar-drum-bass viewpoint of its predecessor by adding acoustic guitar to the mix and bringing young gun drummer McClenty Hunter into the fold. Now, Snidero brings something new to the table again.

Stream Of Consciousness, while working off the same instrumental template as Snidero's two prior releases, is vastly different. Snidero moves further afield than ever before, pushing the envelope in all the right ways. Free jazz filigree doesn't find its way into his work, but Snidero does go out on a limb here with probing tunes that push at the walls of convention ("Stream Of Consciousness" and "Fear One"). His version of outward-bound music still retains firm structure in most respects, with modal manners and pulsating cymbals grounding the title track, for example, but they look toward the great beyond and feel free of the shackles of jazz norms and niceties.

Drummer Rudy Royston and bassist Linda May Han Oh, two first-call rhythm guns on the New York scene who've established a strong bond while working together with trumpeter Dave Douglas, deserve much of the credit for the fresh sounds on this CD. Royston's rocket fuel-propelled drumming is at the center of the title track and "Fear One," and Oh's slick-as-hell bass makes "Black Ice" the grooving stand out on the album. They prove equally important in waltzing scenarios ("Wisdom's Path") and blissful states ("Nirvana").

Snidero has never sounded better. The creative and tonal hallmarks that have made him such a respected player remain intact, but his fiery disposition is balanced with a focused and friendly quality, slicing through the mix or simply drawing focus and floating in the musical ether that surrounds him on "Vantage."

This may be the strongest album in a discography packed with winners. A change, once again, has done Snidero good; while Stream Of Consciousness may not be typical for him, what is?