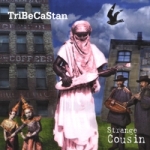 The musical state of mind known as TriBeCaStan was co-founded by multi-instrumentalist John Kruth (whose more colorful credits include "banshee mandolin" for rock bands the Meat Puppets and Violent Femmes) and ethnomusicologist Jeff Green. Their forces were joined, in their march toward musical independence, by bassist Dave Dreiwitz (from the band D.J. Sweeney), and multi-reed man Matt Darriau (The Klezmatics).

Strange Cousin builds relationships between unfamiliar international musical relatives. Even while charting new musical territory, Kruth recognizes that TriBeCaStan does not quite go where no one has gone before. "People like Don Cherry and Yusef Lateef were just as much folk musicians as jazz musicians. They are the epitome of what we're striving for," Kruth explains. "They took folk melodies from around the world and improvised on them."

Opening and closing bookends composed by modern jazzmen Cherry and Sonny Sharrock instantly illustrate Kruth's point. Cherry based his "Mopti" on a song from a village in Mali; TriBeCaStan retains the tune's Oriental sound with bamboo flute, but expands this sound by arranging the flute in a rhythm strummed by an old country banjo, with harmonica on harmony. Sharrock's "Many Mansions" circles back on itself and incorporates a Steve Turre solo on shells that would sound crazy in just about any other jurisdiction except TriBeCaStan.

Two other titles honor jazz, albeit in music that goes far beyond it: "Yusef's Motif," a worthy tribute with a unique sonic combination of African flute and Slovakian shepherd's pipe; and "Princess Rahsaanica," with a flute melody that evokes the sound of Rahsaan Roland Kirk, along with background trombone and other instruments that honor his adventurous and playful spirit. (Here's hoping that TriBeCaStan honors late producer Joel Dorn's entire Atlantic jazz roster!)

Other stops between these mileposts also lead to exotic destinations. "Dancing Girls (of TriBeCaStan)" grows from hand cymbals and percussion into a colorful travelogue with flute and strings. That song twirls into a "Tribecastani Traffic Jam," which organizes the sounds of a traffic jam and pileup into a chaotic, noisy melody. In "The Flowers," Darriau's klezmer clarinet sound dances above its rhythmic movement, just like that famous Fiddler on the Roof.