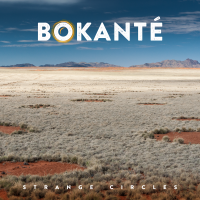 Due to Michael League's prolific body of work with his record label, GroundUp Music, he has his fingers in many pies, the latest of which is a new band, started by the Snarky Puppy guitarist/bassist/producer, called Bokanté. The word means "exchange" in Creole, the language of the band's vocalist Malika Tirolien, and the music is meant to represent this idea of a cultural exchange between the melting pot of musicians involved. For the most part, Strange Circles delivers; a vibrant album that makes clear the individual influences from each band member, but League's somewhat predictable arrangements give the session a somewhat sterile feel.

Perhaps the most thrilling element of Strange Circles is the simplicity of the compositions. It's really satisfying to listen to each track and pick out the individual threads that come together to make them so animated and aesthetically impressive. "Nou Tout Sé Yonn" has a moment towards its end where the band demonstrates how it constructs every song by building up each section of the track, layer by layer, into an incredible, texturally diverse cacophony built from a series of very simple ideas.

Unfortunately, whilst this is the album's biggest strength, it also paves the way for its greatest flaw. Once how the pieces have been constructed is determined, the arrangements across the album become predictable to the point where they feel generic. The pattern of Snarky Puppy-esque bass lines and baritone guitar riffs, built on top of percussion phrases with a satisfying mix of timbres and followed by Tirolien's gorgeous, multi-tracked vocals—subtly complemented by Roosevelt Collier's lap steel playing—becomes monotonous after awhile.

Make no mistake: this is still an enjoyable album. The melodic writing and performances on Strange Circles are excellent and there's no denying the band has heaps of chemistry but, unfortunately, some of the arrangements feel somewhat worn. The lesson the band should learn before its next project is that a distinct formula doesn't necessarily translate into a consistently engaging personality.