By C. MICHAEL BAILEY
March 20, 2008
Sign in to view read count
We are in the midst of an explosion of duet recordings, pairing instruments not typically associated with musical duos. In all cases, no traditional bass instrument is used. Pianist Kristjan Randalu and percussionist Bodek Janke perform Live (Jazz n' Arts, 2007) at Tollhaus, Karlsruhe. Marilyn Mazur and Jan Garbarek join percussion and saxophone on Elixir (ECM, 2008) while Ketil Bjornstad and Terje Rypdal recall the glory days their quartet The Sea on a smaller scale.

The duet is perhaps the most intimate of performance formats, more so than solo performance because it lets you in on musical empathy between two people. In all of the recordings considered here, the two participants have a long histories with one another. But this is where the similarities end. These are three disparate performances that illustrate the power and depth of the duo recital.

Percussion and piano may seem an unlikely pairing but it becomes one that succeeds when in the hands of the wonderfully talented Kristjan Randalu and Bodek Janke. The two expertly navigate six pieces drawing from original compositions, Tin Pan Alley standards, and arrangements of traditional tunes. In their approach, Randalu and Janke are of one mind: rhythmic propulsion.

Randalu pianism is as percussive as Janke's. The opening original composition, "Confidance" is largely ruled by Randalu's left hand until an impressionistic interlude where Janke adds his voice to his percussive palette. The bebop standard "All the Things You Are" is introduced by Randalu as a Bach-like two-part invention before Janke shakes things up, recalibrating Randalu into a quasi-Monk-cum-Cecil Taylor mode. The two musicians skip through 70 years of jazz history before bringing the piece to a close.

Randalu's arrangement of the Largo from Dvorak's Symphony No. 9 begins almost pastorally, with church harmonies and hints of the Wild West. Janke insinuates his way into the discussion and Randalu becomes more orchestral. Then things become Charles Ives-abstract (think what would happen if Wallace Stevens composed music). The performance of "If I Were a Bell" is decidedly not your parent's Miles Davis. Janke's lengthy percussion introduction is enlightening and it is recommended that the reader seek its video performance on YouTube. Doing so will bring these to masters into sharp focus

Percussionist Marilyn Mazur and saxophonist Jan Garbarek turn in the most organic recording of the three considered here with Elixir. Recording documentation states that the combination of drums with a horn is one of the oldest instrument combinations imagined. These two tap into that lengthy history, providing music that is at once earthy and sublime.

Mazur has quite the bag of percussion tricks which she employs throughout her recital with Garbarek. The opening piece, "Clear," begins with a low percussion tone and a shimmering gong. Garbarek rasps a simple folksong melody and slow improvisation. The end result with "Clear" as with a good bit of the rest of the recording is a soundtrack quality. Think of a Chilean village at dawn with smoke rising over el sendero luminosa.

Mazur is equally compelling alone. She effortlessly draws everything from her instruments, again in a soundtrack fashion. As a listening experience, all percussion performances are typically a cause for alarm (for those who came of age in the age of "In-A-Gadda-Da-Vida"). Not so with Mazur. On the sparse "Pathway," Mazur starts with the same low tone and gong as "Clear" before expounding on tubes and cymbals. "Joy Chant" takes on a Caribbean feel of traditional kettle drums with Garbarek providing, while not exactly a "St. Thomas" vibe, nevertheless a Rollins-like improvisation on the theme.

This is rare music that is truly universal in its scope and appeal. 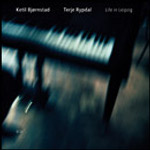 If Elixir is primal-organic, Life in Leipzig is Goethe-polymath. Pianist Ketil Bjornstad and guitarist Terje Rypdal have a long history having been associated on The Sea recordings with Jon Christensen and David Darling and on Bjornstad-led recordings. Life in Leipzig captures the pair before a large and appreciative German audience. It may be too simplistic here to suggest that Bjornstad and Rypdal are merely virtuosi. The compelling question for the listener is how these two musical egos mix when in such close confines as the duo.

Never fear, familiarity breeds neither contempt nor complacency in this case. These two musicians are in perfect tune with one another. "The Sea V" opens with what could only be the rumblings of the lowest register of a Bosendorfer. Bjornstad divines sonorous foreboding from the mammoth instrument while Rypdal extracts any number of interesting sounds from his Fender on full compression. Rypdal sounds like a fully formed David Gilmore as the technical limit approaches infinity. In popular music, Rypdal would be a power ballad practitioner with no peer.

Life in Leipzig is a cerebral tone poem. In the same way that Kristjan Randalu takes a percussive approach to the piano on Live so Bjornstad takes an almost strumming attack to his keyboard. This collection of tunes is well grounded in rhythm and melody with free musical association held to a minimum. Critical mass is reached on the closing track, "The Return of Per Ulv," where pop meets jazz meets speed metal. One can detect the importance of the Beatles in the melody line as expressed by an assertive Rypdal. This disc is a gale-force wind blowing relentlessly.

Tracks: Confidance; All The Things You Are; Largo (from Dvorak's Symphony No. 9); Hinken; If I Were A Bell; Igauhel oma pill.

Tracks: The Sea V; the Pleasure is Mine, I'm Sure; The Sea II; Flotation and Surroundings; Easy Now, Notturno (fragment), Alai's Room; By the Fjord; the Sea IX; Le Manfred/Foran Peisen; The Return of Per Ulv.