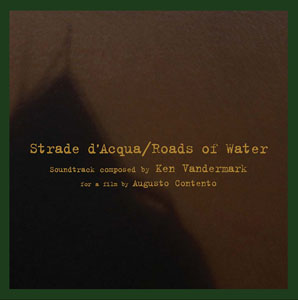 Prolific composer/saxophonist Ken Vandermark's first soundtrack Project, Strade d'Acqua / Roads of Water, brings together his multiple interests and sound designs, creating a work for the film by Augusto Contento. It can exists as a standalone album, separate from the film, without commentary.

Recorded in 2008, Vandermark's Predella Group reunites trombonist Jeb Bishop—an original member of the Vandermark 5—with the leader, as well as his replacement, cellist Fred Lonberg-Holm. For this work, Vandermark arranges the sound in a sparse manner, perhaps to leave plenty of space for the visuals.

Relying heavily on Vandermark's new favorite drummer Tim Daisy—who plays a bit of marimba on "Sieve of the Soul"—the atmosphere is one of slowed tempos and space. In the gaps, Vandermark allows his players to fill in with breathy slurs and the occasional electronic flashes. Bassist Nate McBride's heavy opening to "Blue Over Green" carpets the unison horn lines that give way to seemingly casual single-note from guitarist Jeff Parker, taking flight before the track abruptly ends mid-flight—as does "Signal," an open improvisation of horns, cast about and fuzzy electronics from Lonberg-Holm.

Highlights include Bishop and trumpeter Jaimie Branch's solos on "Dust Town." The moody walking piece first gets the blues treatment from the trombone, then Branch coaxes a very Miles Davisian sound, before a slap-quick change into Vandermark's urgent solo over pounding drums and haunting guitar. The discovery here is Branch, her sound featuring minimalist breathing or tangy muted notes. Like the recent guest appearance of trumpeter Magnus Broo with V5, Branch's horn completes this project.