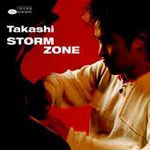 With the release of Storm Zone on the venerable Blue Note record label, the jazz world has been put on notice that there is a new rising son on the horizon among other jazz notables such as Toshiko Akiyoshi, Tiger Okoshi, Sadao Watanabe, and Keiko Matsui, who also hail from the Land of the Rising Sun. A talented composer, improvisor and pianist, Takashi's musical maturity belies his age. He plays with a level of deft and depth that solidly contributes to a profound musical statement. Quite impressive for a seventeen-year-old!

All nine compositions on the recording are Takashi's orignals. His compositions each accurately convey musically a particular scene or mood, as on the opening piece "Southern Cross" in reference to the heavenly constellation, or "Moko-Moko" in reference to the thumping sound of a drum being struck with a mallet. The title track, "Storm Zone," certainly calls to mind the maelstrom of a seriously aggressive weather pattern. The more up-tempo pieces generally begin with a riff played by Takashi alone or in unison with bassist Daiki Yasukagawa. This riff is then overlaid with Takashi's composed melodies and improvised ideas. The slower pieces such as "New Morning" and "The Doorway to Dreams" are considerably more pensive, reflective and serious, but nonetheless hold the listener's interest.

While listening to Takashi, it is difficult to definitively identify one specific musical influence. There are times when one hears pianistic approaches similar to those of Chick Corea, Milt Buckner, Vince Guaraldi or Dave Grusin's work on the soundtrack to the film On Golden Pond. Also a standout on the recording is bassist Daiki Yasukagawa, who also contributes some excellent solo work, in addition to helping lay down excellent time and providing a solid rhythmic background to Takashi's piano.

Takashi Matsunaga is certainly a newer jazz artist whose work will strongly contribute to the jazz art form. Storm Zone is recommended to anyone wanting to get in on the "ground floor" of this up and coming artist. The music world will look forward to his subsequent recording projects and musical offerings.