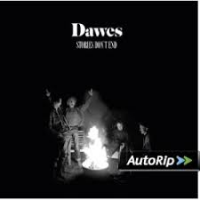 Wrapped in funereal black graphics inside and out, the music of Dawes' third studio album radiates an ambivalence that undermines its ambition.

Choosing to record Stories Don't End on the east coast and enlisting the production assistance of Jacquire King (Tom Waits, Norah Jones, Kings of Leon, among others), Dawes has taken great pains to address erroneous preconceptions as the standard-bearers of a nouveau California rock milieu. At the same time, the group has gone to some lengths to invite being taken seriously here with the semi-conceptual sequencing of the dozen tracks, bookended by "Just Beneath the Surface" and its reprise.

Yet the effort expended doesn't camouflage chief songwriter Taylor Goldsmith's influences, traces of which have been discernible in the past, but never so readily apparent as on this tune, the arrangement of which too closely echoes Bruce Springsteen's "Badlands." "Hey Lover" is a homage to The Beach Boys, preferable via its affectionate tone to that aforementioned track as well as the anonymity that afflicts "Just My Luck." "From A Window Seat," on the other hand, radiates genuine personality, perhaps because Dawes played it live months before this recording.

As the album progresses, however, these four musicians sound less like a band and more like Goldsmith with backing accompanists. It may be fatuous to blame anyone for that erosion of unity, as typified by "Something in Common," but the history of King's work is such that he may very well be the source of the mainstream approach here so markedly different than the idiosyncrasies—albeit readily-identifiable ones—that Jonathan Wilson, guru of the contemporary Laurel Canyon scene, brought to the quartet's previous projects.

"From A Right Angle" is more reflective of the bond so evident on the previous Nothing Is Wrong (ATO, 2011), and even the group's debut, North Hills (ATO, 2009), cohesion that apparently dissipated during the recording of Stories Don't End. The static performance of "Most People" is, unfortunately, prevalent, the background harmonies failing to generate drama playing off Goldsmith's lead vocal, and the track ends before the chiming guitar figures get a chance to combust.

It's the definition of playing it safe, a stance to which Dawes (somewhat) gives the lie by the printing of the songs' lyrics. But that seems like a self-conscious (self-serving?) gesture meant to create the drama of profundity within songs titled with bland phraseology, like "Bear Witness" and "Just My Luck." By and large, neither the material nor the group's rendering of it brings new meaning to the soft clichés, ultimately leaving the distinct impression that this young band is suffering a collective identity crisis from which it may or may not emerge whole.