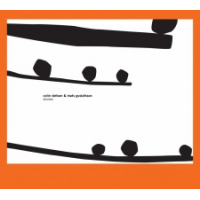 Stones is a recording of the very first meeting of two remarkable saxophonists—legendary Swedish baritone and tenor player Mats Gustafsson and Montreal-based American Colin Stetson, a member of Arcade Fire's touring band as well as bass saxophonist of choice for an impressive list of musicians including Laurie Anderson, David Byrne and Tom Waits. The album's four tracks—some thirty-five minutes of music—were recorded live onstage at the Vancouver Jazz Festival in 2011 and feature the two saxophonists alone together.

Saxophone duos are comparatively rare, with many of them involving Anthony Braxton or Evan Parker with others or together. Despite his vast discography, Gustafsson has rarely been drawn to the format—although he has often played in a trio with fellow Chicago Tentet saxophonists Peter Brötzmann and Ken Vandermark. With Gustafsson and Stetson alone onstage, wielding a baritone saxophone and a bass saxophone in front of an audience, there was clearly the potential for this encounter to become a testosterone-fuelled battle for supremacy between two gunslingers...

Miraculously, it never even approaches such a scenario. On the opening "Stones That Rest Heavily"—all the track titles were partly inspired by Gunnar Ekelöf (1907-1968), Sweden's first surrealist poet—instead of the deep, powerful tones of the two saxophones becoming akin to weapons, it is their warmth that predominates as the players metaphorically embrace one another, exchanging rich sustained notes and melodic phrases. Yes, each of them is packing an impressively powerful punch but, rather than directing them at each other, they work together to create beguiling music.

That goodwill and creativity continues on the remaining three tracks in a variety of forms. Each player occasionally employs his second horn, bringing freshness and variety to the music. At times they raise a smile with their antics, as on "Stones That Can Only Be," where they indulge in an extended spell of quacking at each other. The lack of a competitive edge does not mean the playing is bland. So, on the closing "Stones That Have Only," there is energetic, hard-edged playing from each musician, which verges on brutal at times but never turns nasty; its final passage brings the album to a suitably peaceful and harmonious conclusion. As Gustafsson comments of the whole encounter, "It was completely magic. All was there, the communication, the interaction, the music, the mystery." It is impossible to argue with a syllable of those sentiments. Very highly recommended.