By JEROME WILSON
September 7, 2017
Sign in to view read count 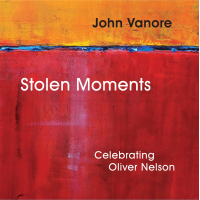 For the majority of jazz fans, the entire career of Oliver Nelson is summed up in one composition, "Stolen Moments" which makes as much sense as Duke Ellington being known for nothing except "Mood Indigo." Though he died at the very premature age of 43, Nelson built a substantial body of work in the jazz and soundtrack worlds. Trumpeter John Vanore has put together a tribute CD of his own arrangements of Nelson's music that captures the totality of his sophisticated blues and gospel influenced sound.

One of the highlights is, inevitably, "Stolen Moments." It's performed here, slightly slower than the original, with a grand orchestral sound that encompasses a deep bass solo by Mike Richmond and gorgeous statements from Vanore and pianist Jim Ridl. "El Gato" is another extended high point , a Nelson work with a Cuban rhythm that incorporates a slowed-down bit of Dizzy Gillespie's "Manteca" along with a long, soul-drenched tenor solo by Bob Malach, crying alto by Steve Wilson with an Eric Dolphy influence and bouncy Wes Montgomery-style guitar by Greg Kettinger.

Other Nelson compositions get arrangements that are briefer but still full of his intricate but soulful writing like the slick, brassy bounce of "Self Help Is Needed," the surging turbulence of "Blues And The Abstract Truth," and the beautiful gospel-derived power of "I Hope in Time a Change Will Come." Steve Wilson does a lot of excellent work throughout this CD but his singing statement of the melody here really stands out.

There are a few non-Nelson compositions whose arrangements still retain his fondness for urbane soul and floating brass backgrounds. "St. Louis Blues" is a molasses-slow showcase for Dave Ballou's trumpet, "Greensleeves" uses a rich brass chorale sound as a backdrop for Ryan Keberle's trombone gymnastics and "Taste Of Honey" has the orchestra pounding and swirling around Malach's joyful tenor.

This set shows that there was a lot more to the work of Oliver Nelson than one tune. His feel for blues and soul produced a lot of marvelous music that shouldn't be neglected. Indeed "I Hope in Time" deserves to be as well-known as "Stolen Moments" itself. John Vanore has done an excellent job in bringing this great music back out into the spotlight where it will hopefully get more notice.

Self Help Is Needed; A Taste of Honey; Stolen Moments; El Gato; St. Louis Blues; Blues & the Abstract Truth; Greensleeves; I Hope in Time a Change Will Come; Reuben’s Rondo.