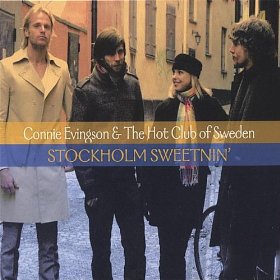 After the release of the top-drawer Sweet Happy Life (Minnehhaha Music, 2012), it was worth pursuing the All About Jazz review archives to see if there were any recent Connie Evingson releases we neglected to consider. Imagine our luck that a significant recording has been overlooked, one that appeals directly to Evingson's Scandinavian heritage: 2006's Stockholm Sweetnin'.

Recorded with The Hot Club of Sweden, Evingson settles into an uncommon comfort level that allows her to relax and sing from a perfectly natural vantage point. The style of Hot Club jazz is not unlike the "gypsy" motif Evingson affected on Gypsy In My Soul (Minnehhaha Music, 2005), both having Eastern European folk overtones in their use of the accordion and clarinet.

The cover title is a Quincy Jones/Jon Hendricks composition, serving as the perfect opening to this Hot Club recital. Guitarists Gustav Lindgren and Andreas Oberg, the latter heard on his own My Favorite Guitars (Resonance Records, 2008), bring that perfectly slinking Django Reinhardt style to swing. Evingson does some clever note-vocalese with bassist Hampus Lundgren to open and close this brisk beater. Trumpeter Dizzy Gillespie's "Bebop" is cleverly intertwined with Cole Porter's "It's Alright With Me," Evingson exercising those note-vocalese chops with the guitars.

"Lover Man" is effective in this neighborhood, providing Evingson a ballad with which to cool things off before floating into a "Besame Mucho." Abbey Lincoln's "Throw It Away," gives a contemporary flair to the recording, while Evingson and Oberg bring everything back to the cooler climes with the original "Autumn in Kokkola."

Evingson can always be counted on to produce superb recordings and this one is no exception.

Stockholm Sweetnin’; It’s Alright with Me/Bebop; Lover Man; Come Love; Swingin’ The Blues; Besame Mucho; If I Had You; Windmills of Your Mind; I Can’t Give You Anything But Love; In A Sentimental Mood; Throw It Away; Out of Nowhere; Si Tu Savais; After You’ve Gone; Autumn in Kokkola.