By NENAD GEORGIEVSKI
October 20, 2013
Sign in to view read count 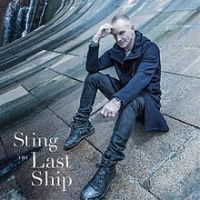 Much like his fellow collegue, musician Peter Gabriel, British singer and songwriter Sting has spent the past decade, since his last album with original material Sacred Love (A&M, 2003) in endless touring, reissues, cover albums and recording past material with a philharmonic orchestra. Far from being inactive or lazy, during that time he also reunited his band Police twice—once for the induction in the Rock and Roll Hall of Fame in 2003 and for a lucrative world tour in 2007/08. By his own admission, after the understated and plastic Sacred Music he had been facing a writer's block and had lost interest in writing original material, and the songs on The Last Ship are the first to arrive after a long period of drought.

These songs were written for a musical to be premiered in 2014 and that is based on the shipbuilding community of Wallsend in the Northeast of England, where Sting was born and raised. The idea for the play and its symbolism was taken from his album Soul Cages where he first explored it. The Soul Cages, (A&M, 1991) which is one of Sting's finest records, was a thematic song cycle about his hometown, a shipyard town, and the death of his father. The symbolism of the shipyards and its demise had become a metaphor for mortality. He would revisit the memories from that period from his life again in his brilliant memoir Broken Music. The liner notes of The Last Ship read that it is a tale of "slow death and redundancy of the shipyard that had loomed over my young life and the streets I played in morphed into a grim metaphor for the baleful demise of my parents." And when he introduced the idea of making a musical about shipbuilders to a Broadway producer, he was encouraged to to try it, and in return that opened the ideas of creativity and desire for writing new songs.

The play's plot, for which Sting has spent three years working, is a homecoming story set during the decline of the shipbuilding industry in England and the narrative centers on labor strife and family in working class Britain. The central characters are a ship worker father and his rebellious son. And when the story's wandering protagonist returns home after 14 years abroad, he finds the shipyard's future in jeopardy and his youthful picture of the place irrevocably changed. The songs on The Last Ship brim and sparkle with lyrical ideas and ambition where Sting's poetic elegance reaches far and away places that others don't get close to. Musically, the songs are a cross between show tunes and British folk traditions, as the album is more close to the ruminative and tender nature of If on a Winter's Night (Deutsche Grammophon, 2009) than the plastic soul of Sacred Love. Sting is a seasoned song-smith with tunes that are replete with ear-worm melodies. The arrangements are simple and sparse, everything lightly touched, with only swells of strings, piano and other instrumental colors buoying up the guitar and his lush voice. The songs are liquid and amorphous, prone to shape-shifting, rarely offering up an obvious verse and chorus symmetry, or easy interpretation. Rather than writing introspective songs from his viewpoint, this time he wrote the songs from a third person characters.

Within this cycle of songs there are many highlights. "And Yet," is a playful number that is sang from a perspective of a sailor returning home wondering about a woman he left behind when he left the port while "Practical Arrangement" is a tender and unusual ballad that tells a story of an older man that tries to persuade a single young mother that they would make good housemates. The reprise version of this song is sang in a beautiful duet with Australian jazz singer Jo Lawry. "What Have We Got" is a boisterous shanty and a wonderful duet with singer Jimmy Nails. Other collaborations include guest vocals from singers Becky Unthank and Brian Johnson of AC/DC.

With The Last Ship, Sting joins in a list of artists from the world of pop music that aim for theater stages where some have found great success and some have not. These songs where he explores the rich heritage of his past, reveal an artist in complete control of his arsenal. Sting is a rare musician whose artistry provides just the right amount of ballast to keep a ship as big as this record buoyant.

The Last Ship; Dead Man' Boots; And Yet; August Winds; Language Of Birds; Practical Arrangement; The Night The Pugilist; Learned How To Dance; Ballad Of The Great Eastern; What Have We Got?; I Love Her But She Loves Someone Else; So To Speak; The Last Ship (Reprise); Shipyard; It's Not The Same Moon; Hadaway; Sky Hooks And Tartan Paint; 5. Show Some Respect