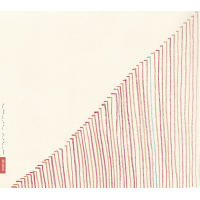 Do you agree with Alessandro Bosetti, that there is art everywhere? A buena vista is a painting waiting to happen, the music of the wind through a stand of conifers, and even the familiar subway stops as they come past are a sort of poetry. The conductor calls out, "Montrose, Irving Park, Addison, Belmont, California, Western, Damen, Division...," and even though it's just information to other riders, you hear his song. Bosetti has been tuned into the musicality of spoken language for nearly 15 years now. This 4-CD box collects five radio compositions the Italian-born musician presented on German radio, as he is a resident of Berlin.

Disc one presents "Arcoparlante" (Talking Arco), a giant game of telephone, the party game where one person whispers a phrase into another's ear, that act is repeated with each person until the last person, repeats what he/she believes was said. The words often transmogrify into something completely new. Bosetti transmitted recorded phrases he collected from varying places, HAM radios, aviation and shortwave radios and asked listeners to repeat what they heard. The responses then were knitted into this radio play. Repetition bred errors like mutations in a DNA strand. That's where the art comes in. Bosetti assembles these mutations into a vertiginous collage of voices, static, found sound, and deterioration. Each fragment presents a different round of telephone. The errors are often funny, but always an insight into the babel of the modern world.

Disc two pieces together the sung texts of the fifth and sixth books of madrigals by Carlo Gesualdo. The hook here is the singers are random people on the street in Naples. The participants were not familiar with the lyric and heard the music through headphones. They also, many of them, cannot sing. And it is in this (non)music that Bosetti makes music, because even song out of pitch, has a pitch. He utilizes a mezzo-soprano, harpsichord, viola, and himself on piano, harmonium, organ, guitar, oud, and banjo as accompaniment. For a Renaissance musical scholar, this may be a seditious act. For connoisseurs of field recordings and the art of noise, this reworking of Gesualdo captures the essence or soul of his madrigals. Pitch be damned.

Disc three "A Collection Of Smiles" creates a chamber music piece from the spoken words of seven people placed in separate rooms with no instructions. Their conversations were recorded separately, then collaged and pitch transcribed for guitar/oud, violin, contrabass clarinet, and piano/electric piano/celeste. Where even a woman's laugh can be part of a musical piece, repeated words form the raw materials for the chamber ensemble. Bosetti mixes voices with their transcriptions so they swing in a post-modern jazz way. As the piece progresses, the voices become the music, and the music becomes the voices.

Disc four presents the most abstract and perhaps most interesting music from the Radio Works. The artist collected the whistled language from La Gomera, an island in the Canary archipelago. The residents use this language to communicate to one another as far as two miles away. Bosetti wrote texts for the locals to whistle and remixed them with spoken words and electronic sounds to make an eerie futuristic mix from a thousand years ago. The second track was created on his return to the island six years later. He re-played his original recordings in various sound spaces and this time recorded not at the source, but at the receiving end. Choosing various locations, the re-recordings were altered by the forest, the caves, the atmosphere, for a more true experience of field recording.