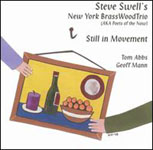 Requiring something of a leap of logic in interpreting its chosen name, Steve Swell’s trio repays listener imagination with serious improvisational interplay. Swell’s been on the scene for several decades and during that time he’s developed an approach to the trombone that builds on the best facets of tradition and innovation. His tone can easily run the gamut from Kid Ory-worthy tailgate smears to abstracted metallic breath sounds in line with the likes of Paul Rutherford.

Past ventures on CIMP have teamed him with a host of heavy hitters in the music including Roswell Rudd, Marshall Allen and Joseph Jarman (the latter two by way of Lou Grassi’s Po Band), but this one conscripts the aid of Tom Abbs and Geoff Mann, two players certainly deserving of wider exposure. Each man favors a versatile stylistic approach in line with Swell’s making the music rife with unpredictable twists and turns. Curiously enough, though Swell’s CIMP discography is swiftly nearing double digits, this is first album featuring him in a trio setting backed by bass and drums.

Both Abbs and Mann double on brass instruments, making three-way horn colloquies like “Dance of the Stratonauts” possible, but it’s the more prevalent horn plus rhythm tracks where their ensemble interactions find the most success. In these former situations Abbs voices his tuba in a fashion akin to the brass basses of old, birthing corpulent anchoring notes around which his partners’ less cumbersome horns dance. “Moon Gem,” the opener, ambles along on a dark string bass ostinato and open beat groove as Swell slides and slurs on top. Mann echoes his own solo with low whistling vocalizations, coaxing thick strumming clusters and dour arco streaks from his turgid strings.

“Zoron” erupts in a blast of ornery angst-ridden exchanges between the three players before quickly catapulting into silence, and as such seems more like an opportunity to blow off steam. But the brisk, rhythm-heavy “Raura” feels more fleshed out and allows Swell to soar in some of his most concentrated blowing of the session. Abbs also takes the opportunity to locute at length on tuba as the driving tempo dissolves into a free-associative discourse. “Nimbus Suite,” the disc’s lengthiest foray, starts out diffuse, but gradually gains shape and structure on the back of a strongly grooving rhythm. Swell’s horn veers to and fro expressively, spraying notes in bold, eructative streams, as his partners bounce boisterously beside him, before dispersing into another meter-less freefall.

Over the disc’s entire duration these three men demonstrate a caliber of communication and individual confidence that is rare in today’s music. Don’t let reservations about the instrumentation dissuade you—in Swell’s hands, brass becomes just as viable a lead voice in the context of bass and drums as more traditional reeds. He may favor the serious side of things, but he compensates any absence of humor with an absorbing amount of musical synergy.

Visit CIMP on the web.