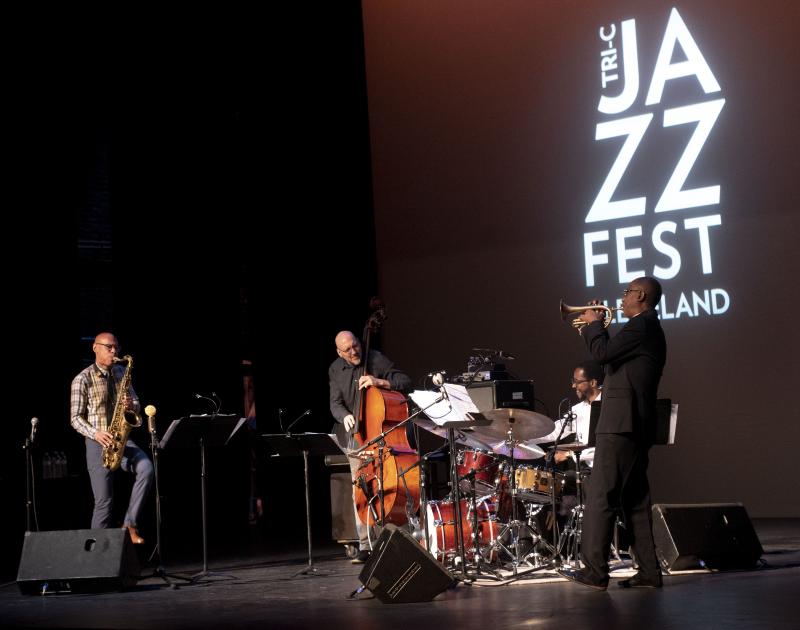 Now in its 39th year, Cleveland's Tri-C JazzFest has evolved over the years having started as an educational springtime event. Most recently, the action has shifted from the Cuyahoga Community College campus to downtown Cleveland's Playhouse Square complex. The event which now takes place in mid-June covers roughly three days and offers both free outdoor performances along with paid indoor shows that run throughout Friday evening and all day Saturday.

Like so many jazz presenting organizations, this festival is attune to the struggle that exists for presenters in terms of juggling mainstream artists with more commercial-friendly acts. By rotating performances among the several stages available at Playhouse Square, the festival does manage to meet the inclinations of several distinct factions. The problem is that rarely shall the twain meet. Those folks who managed to catch Cory Henry's performance were not likely to be found later at Dr. Lonnie Smith's set. Furthermore, this year's festival definitely tipped the scales more in favor of those fringe acts with built-in popular appeal.

Of the few mainstream offerings, an early Friday evening set by Joshua Redman found the saxophonist featuring the ensemble heard on his most recent release. Still Dreaming is a quartet dedicated to an all-star jazz ensemble prominent from the mid '70s until the mid '80s. Featuring Josh's father Dewey Redman, Old and New Dreams was a vehicle for former Ornette Coleman sidemen to speak in their mentor's vernacular while adding their own chapters to the story of the 60's avant-garde movement.

A dirge-like "The Rest" ushered in a multicolored performance that nicely balanced abstract moments with more upbeat and swinging vehicles. Bassist Scott Colley's "New Year" definitely spoke with Ornette-ish tones and proved to be strong forage for development from trumpeter Ron Miles and drummer Brian Blade. Redman's father wrote "Walls-Bridges" and it too served the quartet well, with Josh and Ron balancing rapid fire bursts of melody with overblowing and other strong motivic developments. In addition, Redman's slap tongue phrases would be coyly echoed by Colley's own bass line.

Other pieces from the album like "Haze and Aspirations," "It's Not the Same" and "Unanimity," gave each member of the quartet ample space to speak in their own distinct voices. Miles used a pocket trumpet like Don Cherry had used in Old and New Dreams, but did so in a manner that spoke more to his own personal muse than mere replication. Ornette's "Turnaround" served as the capping moment in what was a first-class recital that spoke to the continued relevance of jazz music's most intellectual strains. It also proved to be yet another solid career choice from Redman, who seems to keep reinventing himself with one sagacious move after another.

The other mainstream jazz offering on Friday evening featured Dr. Lonnie Smith at the intimate Allen Theater. Banked on either side of the Hammond B3 were a drum pad, laptop computer, and a Korg electric keyboard. Smith at the ripe young age of 75 seemed ever poised to explore the farthest regions of his imagination while harnessing the energy and creativity of bandmates Jonathan Kreisberg on guitar and drummer Xavier Breaker.

The highlight of a generous set that went until close to midnight, Smith's take on Paul Simon's "Fifty Ways to Leave Your Lover" was kick started by Breaker's drum beat harkening back to the old warhorse "When Johnny Comes Marching Home." Kreisberg was evidently invested in every note that he played, milking his single-note runs with emotional engagement and ripping off blistering bebop lines with graceful ebullience.

Another number from Smith's recent Blue Note offering All in My Mind, "Alhambra" took on even more epic proportions than in its recorded incarnation. Smith utilized his electric keyboard to conjure all sorts of sounds and textures, from trumpets to violins. As the piece developed, further layers of complexity were added with Breaker laying down some righteous grooves.

By the time of the closing encore, Smith has already worked the crowd in a manner that showed off his true showmanship. Even so, he clearly had a few more tricks up his sleeve when he brought out his cane, which had been supped up with some sort of triggered electronics. Strutting back and forth along the front of the stage, Smith simultaneously tapped the stick on the ground for bass punctuations while strumming it guitar style for a vast array of outlandish sounds. It was a colorful conclusion to a well-paced and varied set of eminently likeable fodder.