Bryan and the Haggards: Still Alive and Kickin' Down the Walls

By DAN MCCLENAGHAN
December 22, 2011
Sign in to view read count 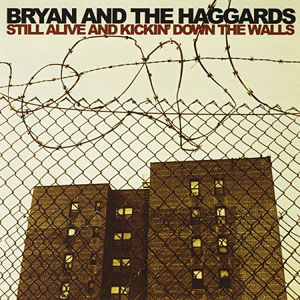 Still Alive and Kickin' Down the Walls is the second foray into an unlikely marriage of free jazz and the Bakersfield, California, country sound of the legendary Merle Haggard, a follow-up to the pairing's raucous honeymoon, Pretend It's the End of the World (Hot Cup Records, 2010). Saxophonist Bryan Murray leads this outfit, a rowdy, rough around the edges quintet comprised of two reeds in front of a guitar-driven rhythm section.

Opening with Haggard's "Ramblin' Fever," the music sounds like a raw honky-tonk bar band serenading a crowd of cowboy-booted, Stetson-wearing good old boys who don't mind having a beer or three and getting up and stomping to the music. Murray and fellow saxophonist Jon Irabagon squawk and honk with the best of them, then wail on "Seeing Eye Dog," in front of a crisp rhythm—good time music, ladies and gentlemen—giving way to guitarist Jon Lundbom's fractured and jagged solo.

All the music is either Haggard-penned or songs that he has covered, including Bob Wills' "San Antonio Rose" and Wynn Stewart's "Sing a Sad Song." Haggard drew the ire of the counterculture with his 1969 "Okie From Muskogee" single, a song with lyrics that decried, "hippies out in San Francisco" who wore their hair "all long and shaggy." That, along with a couple of other tunes with patriotic themes, at a time when the Vietnam Nam War raged and not "not trusting anyone over thirty" was a youth anthem (Haggard was thirty-two when "Okie..." was released) gave the Oildale, California-born country artist a reputation for deep un-coolness with a large section of the young record-buying public. But Haggard has, over the forty ensuing years, proven himself a consummate music-maker, perhaps the most influential and important—and honest—American country music artist after Hank Williams. He still releases consistently high quality music, about an album a year, and even put out a standards-themed set, Unforgettable (Liberty Records, 2004).

"Cool" is elusive and fickle, but Bryan and the Haggards treat the country legend's music with a loose-jointed respect. The twanging guitar and saxophones on their version of Haggard's "Mixed Up Mess of Heart" mimics the sounds of fiddles, while the cowboys are up and dancing with those ladies in heartbreakingly tight jeans to a laidback take on "If We Make It Through December."

This sophomore effort is a bit less free than the band's debut, a bit more overtly country, and very cool—both Haggard and Bryan and the Haggards.