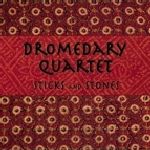 With Sticks and Stones string players Rob McMaken and Andrew Reissiger, the original members of Dromedary the duo, have reconstituted the group that was on their self-published 2006 eponymous album, replacing bassist Neal Fountain and drummer Jeff Riley with Chris Enghauser and Louis Romanos respectively. While the band's personnel might have changed, their music remains enchanting, hypnotic and full of hope and happiness.

The Athens, Georgia scene is very fertile and the band has toured the world over, producing a very tight group. Thus, the personnel changes are a bit surprising, compounded by Reissiger's move to California. However, Romanos—originally from New Orleans—and McMaken go back ten years, his move to Athens after Hurrican Katrina proved to be fortuitous.

The McMaken/Reissiger duo, which was the original Dromedary, released a number of self-published albums including Artifact (2001) and Live From the Make Believe (2002) before expanding to a quartet. The rhythm section enabled their music to become more complex by adding a third melodic/harmonic line and concretizing the implied clash between the beat and the bar line.

Sticks and Stones was recorded live in the living room of a house near Athens during the summer of 2007, thus capturing a "what you hear is what there is" feel that epitomizes the band. While the previous quartet recording was both joyous and intense, this release ups the ante significantly.

The music is still decidedly full of the joy of playing and the love of folk music from all over the world, but now there has been added a darker undertone that feeds a deeper intensity. McMaken would give all of credit for this to Enghauser and Romanos, saying that this bassist and drummer allowed Dromedary (meaning the duo) to maintain its sound and aesthetic while adding the rhythmic and harmonic bottom.

McMaken goes on to say that Enghauser's playing "clearly drives the record," his contribution is indeed much more than simple pulsing. While he meshes extremely well with Romanos when asked, more often than not he is playing a third melodic voice that both supports and pushes the leads of the duo.

Eight of the eleven tracks are originals with compositions by Godofredo Nunez ("Jumechi"), John Zorn ("Ravayah") and a traditional tune ("Qolquechakamanta") added for good measure. From the first notes of the title tune, with its odd length bass vamp, Dromedary makes its statement of purpose. The interplay between McMaken and Reissiger is terrific, driven by Romanos and Enghauser. The unpredictable arrangement maintains interest in music that is basically static harmonically.

Sticks and Stones is an impressive effort that shows how the Dromedary duo and, by extension, the quartet, have created a new sound that is more than the sum of its influences. The freedom and creativity inherent in jazz specifically and American music in general is on display for all to hear, journeying far and wide without leaving the living room.